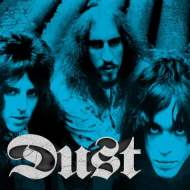 History is kind to some musicians and frustratingly obtuse to others. History can also be a late bloomer to certain artists if enough archaeologists of sound champion their mining. New York underground legends DUST have remained a subcultural phenomenon for many years, one reason being because the cover art for "Hard Attack" is comprised of Frank Frazzetta's pulp fantasy masterwork, "Snow Giants". A large component of DUST's long-term curio has always been that it represents the origin point of Marky Ramone, then known by his real name, Marc Bell. The main notable to DUST is that they are frequently uncredited amongst their more renowned peers BLUE CHEER, IRON BUTTERFLY and STEPPENWOLF as one of the first authentic American heavy metal acts.

After an overdue stretch of time in this current metal renaissance, history has finally caught up with DUST. Perhaps the reason time has ignored DUST was because they never reached the upper strata of rock label favor in the early seventies when they recorded their only two albums, "Dust" and "Hard Attack". It could be because DUST had a propensity to mix genres between acid rock, country and even a Bowie-inspired take on Gothic expressionism now and then. Could anyone have truly been prepared for the swooning chamber strings and maudlin lyrics of "Thusly Spoken" in the midst of the whumping thuds of "Walk in the Soft Rain" and "Learning to Die" on "Hard Attack?"DUST were an amalgam of everything spinning around their addled heads from the British Invasion to psychedelia to an Allmans-rooted swing of country rock.

In another words, DUST in their time was hardly easy to categorize. Coming to the work that Marc Bell and his compatriots Richie Wise and Kenny Aaronson laid down with contemporary ears, it's easy to hear shades of CREAM, KING CRIMSON, THE WHO, ATOMIC ROOSTER, PINK FLOYD, the Allmans, David Bowie and of course, THE BEATLES. In the case of "All In All", you can hear a collision course between Swinging London and the MC5's Motown-hung over Detroit. On paper, the ingredients for a pretty successful distorto rawk band in today's retro-appreciative underground. Yet one gets the impression what DUST was throwing into the faces of their audiences back in 1971 and '72 was for acquired tastes, no matter how reflective and talented a trio they were.

The voices of diehard sludge metal fans have not only been heard but acknowledged as Sony resurrects "Hard Attack" and "Dust" onto a single disc for multiple generations who've long awaited their homecoming. There's a funny dichotomy that the elusive big rock label evading DUST in their time and effectively sent them packing has now come to their rescue more than four decades later. Better late than never, as the adage goes.

It's not just the story of Marky Ramone called into review with these DUST reissues, albeit the glaring notable is getting to hear just how dynamic and explosive the guy was before taking on the straightforward punk drives in the RAMONES. It's evident Marc Bell was as much a maniac on the kit as his DUST cohorts and manager Kenny Kerner credit him. In DUST, Bell was unrestricted from turning out cataclysmic rolls and crashes and he loosened his beat patterns at will. Meanwhile, guitarist Richie Wise (a reported lunatic onstage) and freewheeling bassist/vocalist Kenny Aaronson likewise played against conventions, even if we can now detect a dependent love of CREAM radiating through most of their punchy music.

Heavy rock heads are going to groove to the sonic shake of the CREAM and Hendrix-plastered instrumental "Ivory" and the chunky detonations erupting throughout "Learning to Die". "Hard Attack"'s opening cuts "Full Away/So Many Times" and "Walk in the Soft Rain" may not be as thunderous on record as DUST's live reputation, but both are astute mirrors of what was happening inside the hip circles of rock 'n roll at their time. Thus it's hard not to think Richie Wise was sending Eric Clapton a gentleman's nod of regard on his juicy, ripped-up (not ripped-off) riff impressions on "Walk in the Soft Rain".

The crumbling beats and dirty chords on "Suicide" wrangle CREAM, STEPPENWOLF and MC5 into a tempered calculation of subliminal boom, tempered only until Kenny Aaronson intercedes with a raucous bass solo. "Hard Attack" is then wrapped with the brief acoustic sonatina "Entrance", which will trigger instant comparison to the iconic intro of YES' "Roundabout", which had blown up FM radio a year prior. In this case, DUST were being the snarky Brooklyn dodgers they were by throwing that 26-second interlude as their album's finale.

The bigger treasure tunes come with "Stone Woman", "Chasin' Ladies", "Love Me Hard" and "Loose Goose" from the self-titled album. Richie Wise goes bonkers on the slide guitar with "Stone Woman" in shadow of both Eric Clapton and Keith Richards, while Marc Bell rips his ride cymbals as one of many sub-rhythms to the amped-up track. In fact, most of the "Dust" album is played well on the edge. As with many solid power trios, Bell, Aaronson and Wise are all over the place within their stations you'll want to spend much time repeating these cuts just to soak them up properly. Aaronson and Wise jam to their hearts' content prior to the fadeout on "Chasin' Ladies", alone one of "Dust"'s signature moments.

The left-of-center country jukes spread throughout both albums on "How Many Horses", "Goin' Easy" and "I Been Thinkin'" come off as natural variations to DUST's ditch-the-rules ethos, just as the RAMONES parlayed into "Road to Ruin". You have to assume the later-dubbed Marky Ramone had a fair hand in that, as much as you can safely assume DUST were following THE ROLLING STONES' lead for efficiently mingling Delta blues, country and rock 'n roll within one harmonious hub.

If there's any fair claim to pure heavy metal within DUST's repertoire, it's most evident on "Love Me Hard", "Learning to Die" and the BLACK SABBATH-soaked "From a Dry Camel". In particular, the latter case is so tone-drenched it's hard to think of Marc Bell moving towards the pop rock and punk drives he was called upon to deliver in the RAMONES. Though Richie Wise filters more twangy slides and BYRDS-esque acoustic languor into "Often Shadows Felt", the hard-driving choruses hint at future metallic schisms.

While DUST never became a household name of their era (perhaps they mimicked CREAM so often they were doomed to follow in the former's footsteps),at least history has now shined a favorable light upon them. Thank God for that, because the number of recorded works in DUST's time together hardly does them justice. Had they been discovered by the right powers, who's to say if DUST wouldn't have competed strongly at least in the American rock market? Then again, the RAMONES might not've become the same band if nature hadn't taken its course. Likewise, Kenny Aaronson's bass contributions to Bob Dylan, Joan Jett, Billy Idol, Hall & Oates and others were their own understated parts to those artists' careers. A monster talent on bass such as Aaronson, it's easy to feel his involvement helped a great deal to the success of said affiliates. Therefore, don't be surprised if from this moment forward you start seeing DUST's name crop up often in future rock chronicles.