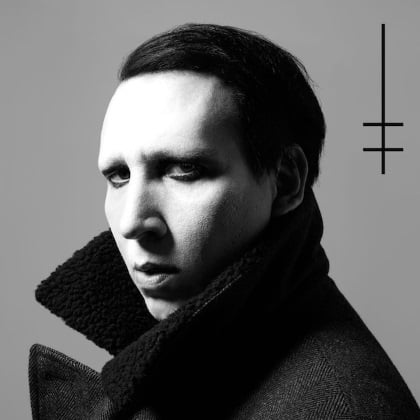 MARILYN MANSON was acting his age in 2015 with the goth hard rock album "The Pale Emperor". His DAVID BOWIE worship had reached an apex. His idol has since passed. Even more recently, the pop cultural icon from whom he borrowed half of his name, Charles Manson, has also died. Maniacal world leaders are allowing their fingers to inch closer and closer to the nuke buttons. The world keeps turning and burning. It seems like no greater time than now for the shock rocker to return to his roots, and that's exactly what he's done with his 10th studio album: "Heaven Upside Down".

Years ago, the shock rocker's explosive entry into the mainstream reignited the Satanic Panic as he stoked the puritanical fires of American social conservatism and capitalized upon the maelstrom. As absurd as the accusations were, he was served on a platter as a scapegoat for the Columbine massacre. The androgynous and effeminate attributes of his appearance weren't entirely unique in the world of rock 'n' roll; DAVID BOWIE held that torch beforehand. But MANSON's aesthetic surely challenged prevailing perceptions of gender roles and identity as he infuriated the transphobic and inspired the transgendered.

MANSON's social commentary left black lipstick stains upon pop culture, not to mention that his band's musical contributions can't be ignored. The role that film, television and video game scoring veteran Tyler Bates has played in MARILYN MANSON since "The Pale Emperor" cannot be understated. He has produced and composed all the music and has been responsible for the bulk of the instrumentation on both efforts. Bates cultivated brooding bluesy glam rock soundscapes on "The Pale Emperor"—which linger here on track 6, "Saturnalia". This time around however, he leverages his penchant for crafting massive soundscapes toward an industrial edge that is ironically and counterintuitively loose and organic rather than rigid and mechanical. MANSON hasn't been this energetic since the nineties. Opener "Revelation #12" stutters with electronic industrial pulses disintegrating and falling into the spaces around the rock steady beat over which MANSON narrates with emotive moaning and heart-wrenching screams.

Where previous album "The Pale Emperor" was a hard rocking and contemporary take on synth-pop, "Heaven Upside Down" reaches back in time to slide between MANSON's more abrasive industrial-driven "Antichrist Superstar" (1996) breakthrough and the 1998 seventies glam-inspired follow-up "Mechanical Animals". The original album title was scrapped but remains the name of the ridiculously entitled track "SAY10". Granted, MANSON successfully played with Dr. Seuss imagery, and by fostering Seuss's eeriest qualities delivered them in the same manner that makes clowns creepy to some people. The word play here, however, comes across as unintentional self-mockery.

And while the wordplay of the title "JE$U$ CRI$I$" is sophomoric—as well as its lyrics like, "If you wanna fight, then I'll fight you. If you wanna fuck, I will fuck you"—it's also memorable. MANSON isn't just smart enough to exploit the pop-music formula of reeling in listeners with addictive, repetitive, simple refrains, he's a brilliant artist who knows how to challenge his audience and society. He has done so in the past, and, more recently, by engaging in performance art, pointing a fake rifle at the crowd during a recent set at San Bernardino's Knotfest. This just weeks after the mass shooting in Las Vegas, and just hours after the one at a church in Texas. His antics remain challenging; however, his music has become self-referential.

Throughout his career, MANSON's newsworthy actions have actually been quite safe measured against the hellish extremity of the early nineties Norwegian black metal scene. The antichrist superstar became a household name, however, because the melodic hooks sunk deep into pop culture's psyche. (Look no further than the bouncy broken rap-laden song "Tattooed In Reverse" for proof that he's still got it.) And yet the means by which he achieved his considerable status couldn't be any more ironic considering the anti-establishment ethos he has always projected. Sure, it is possible that he toys with the edifice of the mainstream for the end goal of mocking it, but was the aforementioned incident involving MANSON pointing a fake rifle at people intended to provoke thought, or was it a publicity stunt? Perhaps it was both.

Twenty years after he first ruffled the feathers of evangelical America, MARILYN MANSON is no longer shocking. The goth overlord doesn't seem desperate, but he does seem as though he has run out of ideas. Yes, his artistry has become more fine-tuned and dynamic. "Heaven Upside Down" is enjoyable, but he's trying to rekindle a fire rather than set the world ablaze as he once did. The more pronounced aggression is a welcome return, and hopefully it is indicative of a revitalized artist rather than a sign of adrenaline violently pumping a dying artistic heart.