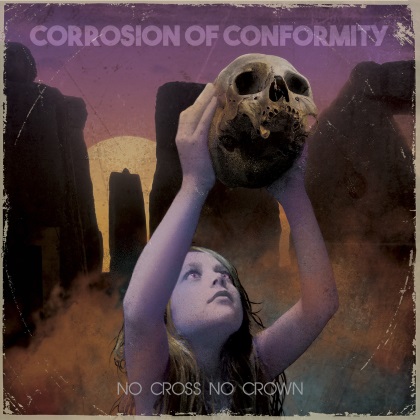 No Cross No Crown

CORROSION OF CONFORMITY has returned with its best album in 22 years. The group has never released bad or subpar music, but since Pepper Keenan removed himself from the picture to focus upon DOWN, the unit lost its momentum and magic. Now that the charming frontman has returned to the fold, the group has repossessed the power, spirit and sounds of "Deliverance" (1994) and "Wiseblood" (1996). Fortunately, this new album isn't simply a rehash of those classics. "No Cross No Crown" is an extension of that timeless spirit and artistry that benefits from the musicians' growth since the release of those revered albums.

In some quiet vocal quarters, the band's groundbreaking crossover material of the eighties—some of the best examples of the thrash metal and hardcore punk blend that one can find—is the only CORROSION OF CONFORMITY music worth listening to. However, the larger segment of fans not only "allowed" the North Carolina-based band to evolve, they embraced it. Keenan was the probable catalyst in the way CORROSION OF CONFORMITY began to encompass Southern swagger as the unit simultaneously shifted the balance of its BLACK FLAG/BLACK SABBATH fusion toward the latter. The guitarist provided backing vocals to Karl Agell on "Blind" (1991),aside from helming the mic on the MTV hit "Vote with a Bullet", as, at that time, the unit pivoted toward a pummeling groove metal approach. Subsequently moving forward as CORROSION OF CONFORMITY's frontman on "Deliverance", Keenan's thick drawl dripped all over the Southern soaked SABBATH-styled reconfiguration. The group would go on to delve deeper into the soul of the South, perhaps most notably with "America's Volume Dealer" (2000).

But none of this means that the rest of the band is chopped liver. After all, that trio of musicians, in fact, comprise CORROSION OF CONFORMITY's founding members. Woody Weatherman's lead playing exudes an energetic and soulful blues 'n' doom quality that's propelled by Mike Dean's groovy bass lines and Reed Mullin's straightforward, in-your-face drum battery that is as tasteful as the rest of the instrumentation both individually and collectively. It's interesting that the primitive rumblings of "Eye for an Eye", as unpolished as they were, suggested the specific sound they aspired toward and, one day, in the early nineties, achieved.

With "No Cross No Crown", there is a dramatic sense of power from the moment you hit play. A psychedelic haze rises as deep breathing preludes the sounds of a beating heart in the grandiose doom opening intro "Novus Deus", before leading into the first proper song: "The Luddite", a track fueled by an absolutely infectious, blues-based riff. Immediately thereafter, "Cast the First Stone" gears the album up as one of its most high-energy numbers, one that would have led directly into the gripping, up-tempo bruiser "Wolf Named Crow" if it wasn't interrupted by one of the album's several calmer interludes, allowing for breathing room and creating contrast so as to avoid monotony and accentuate "No Cross No Crown"'s heavier elements. The main riff idea of said interlude, "No Cross", serves as a motif appearing later in the album in the similarly entitled title track, which glides forth with acoustic majesty and surreal melody. Signature CORROSION OF CONFORMITY elements take hold as "Old Disaster" sounds like it was performed by a burly and beefed-up, metallic version of GOV'T MULE or THE ALLMAN BROTHERS BAND. And lest we forget, shameless SABBATH worship emerges on "E.L.M.", a track that perhaps tears a few pages from TROUBLE's playbook as well.

The album title was derived from one of CORROSION OF CONFORMITY's recent tour stops at a 16th century English church at which they played. One of the dressing room's stained-glass windows depicted a man being persecuted with the accompanying inscription: "No cross no crown". Keenan used the title as a thematic starting point, but—in spite of its history as a politically conscious band and the title's suggestive possibility of biblical significance—he didn't use it as a means to forward any kind of political or religious commentary. "I think everyone needs to get away from that mindset in general," Keenan stated via a press release. "It just seems to be a mess out there nowadays. We need to get back to being humans and taking care of each other and simple things like that. For us, the terminology 'No cross no crown' is a theme." In that sense, such an attempt to circumvent politics finds the quartet as socially conscious as ever. In any event, CORROSION OF CONFORMITY has returned with a release that proves that the gentlemen are back on their game and ready to rumble.