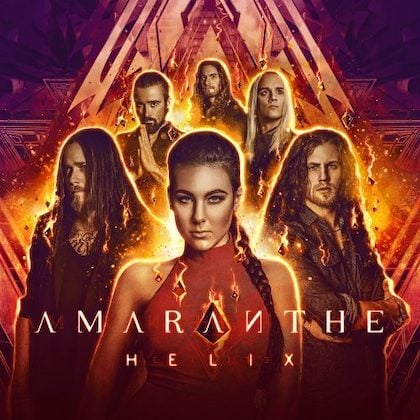 An outboard motor propeller has three blades, and the curvy, motional twirl is considered a circular helix. Swedish electro-rockers AMARANTHE has always housed three vocalists, two in the clean ranges and one in the hard. While the insanely talented Elize Ryd inherits most of the vocal duties, the dynamics of the three vocalists brought together in harmony through AMARANTHE's music could appreciatively be considered a helix in its own right.

With co-founder and male clean vocalist Joacim"Jake E"Lundberg permanently leaving the band in 2017, Elize Ryd finds herself flanked these days by Nils Molin, Lundberg's replacement, and scat-grunter, Henrik Englund Wilhelmsson. "Helix" is AMARANTHE's fifth album, and you're either in for a rapid-fire treat as an existing fan, or you're in for a sensory-overloaded introduction. Often referred to as a melodic metalcore act, AMARANTHE doesn't settle for such a primary dissemination. The band has nearly the same hype, interchangeable pitches, appetite for pop and lunatic energy of BABYMETAL. AMARANTHE impressively knocks out most of its busy, electro metal jams on "Helix" within three minutes, save for the near four comprising the agro-ballad "Unified".

Opening track, "The Score", charges with head-on steam as AMARANTHE throws its entire arsenal into a declaration of its pop-fused might, inclusive of glistening electronics, raining beats and the group's whirligig triumvirate of voices. The seamless pass offs between Ryd, Molin and Englund Wilhelmsson adds to "The Score"'s excitability. "365" thereafter is an EDM-kissed fusion of agro-pop, pitting KORN against Ariana Grande, if you will.

Englund Wilhelmsson's wolfs are intended to be barbaric, but they're as perfectly planted, and arguably glossed, as you'd want it without disrupting the sweetness and light Elize Ryd casts with dizzying composure. His position is reminiscent of MUSHROOMHEAD's Jason"J Mann"Popson's bark raps, but the way he matches Elize Ryd's dubstep-whirled huffs on "Dream", it becomes a surreal listening experience.

"Inferno" and the title cut pick up IN FLAMES' trail blazed from "The Quiet Place". "Inferno" is flipping hectic with Morten Løwe Sorensen's jackhammer, industrial groove plowing the way for the riffs. Those merely serve as a platform for AMARANTHE's swiftly changing vocal sections. In three minutes flat, the band pounds the crap out of everything with a clubbing rhythm on "Countdown". Before you can call "Countdown" a vehicle for Lady Gaga to make her would-be promenade into metal, the mood changes altogether, and Elize Ryd shows her the ease of the transition.

"GG6" is the heaviest and hardest-pumping number on the album; its only drag is the omnipresent breakdown-turned-primary tempo, but the dance-happy "Breakthrough Starshot" thereafter turns out to be the album's hottest groove. "Iconic" becomes the album's surprise moment, running mad with scorching thrash and pogoed-out choruses.

AMARANTHE is a bastard child bred of a ménage-a-trois staged between metalcore, dubstep and EDM, but the band has polished its act so greatly you have to at least admire its fluidity whether you dig the vibe or not. The unit may be too much to digest for the tens of thousands of grinding Molly eaters at Ultra Music Fest, but AMARANTHE fearlessly metal-raves with an invitation to millennial thrill seekers to take a look at its senses-bombing side-stage routine.