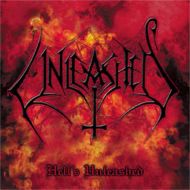 Never known as one of the genre's more inventive outfits, Swedish death metallers UNLEASHED established a niche over the course of their previous five full-length albums that has ensured the group a die-hard and loyal following while simultaneously rendering much of their output virtually interchangeable.

Despite a five-year break that followed the release of the group's last studio offering, 1997's Warrior, UNLEASHED appear to have made little headway in the musical department and have picked up exactly where they left off, opting to stick to the same kind of straight-ahead, no-frills death metal that has made them one of the genre's most consistent and reliable entities.

At their best, UNLEASHED still deliver this kind of stuff with a fair amount of conviction, with Johnny Hedlund's distinctive growls fortifying the group's seemingly endless arsenal of by-the-numbers death metal riffs, a lot of which have an air of familiarity to them that is difficult to shake off.

As has been the case with the group's past offerings, the Stockholm quartet seem to be going through the motions and rehashing previously-charted territories without elevating the quality of the material to a standard one would expect to hear from a band that is considered to be one of the pioneers in the genre, particularly as it pertains to the Swedish scene. Songs like "Don't Want To Be Born" and "Demoneater", while packing a potent punch and not without their redeeming qualities, ultimately fail to ignite the kind of spark necessary for a band like UNLEASHED to make a mark in the year 2002, especially when compared to such innovative acts as IN FLAMES and SOILWORK, both of whom have evolved without compromising the essence of their respective styles.

Unless you are a death metal purist with a penchant for workmanlike performances that are short on originality and lacking in creativity, it's difficult to imagine Hell's Unleashed being viewed as anything else but a predictable, unexciting effort that is all but certain to go down as one of the least impressive efforts of UNLEASHED's recording career.