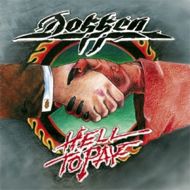 Remember the hits like "Into The Fire" and "Burning Up The Night"? We certainly recall them clogging up the airwaves, and at the same time are still trying to work out just how and why DOKKEN ended up there so often. Sure, there were a few toe-tapping moments ("Unchain The Night" being one of those rare gems) — but on the whole DOKKEN were like a SCORPIONS without the sting, where shaky vocals, songwriting-by-numbers and a penchant for leaving you cold lifted them to a much higher position than their output necessarily deserved.

Coming several albums down the line since melodic rock took a mainstream nosedive, "Hell to Pay" sees them "going back to their roots" (they flirted with a semi-grunge sound a few years back to a singularly unmoved world),only nowadays it's without guitar wiz George Lynch — one of the rare plus points before he jumped ship in the mid-Nineties — and, unhappily, in possession of a sackful of soporific ballads.

One of these is called "Still I'm Sad", which isn't a cover of the gutsy RAINBOW song of the same name, although by mere association it heaps disgrace on the title by being an absolute wet weekend of a track. Same goes for "I Surrender" (spot the RAINBOW reference again),with the worst culprit of them all, "Care For You", being so dead on its feet that you wonder how a man like Don Dokken, with all his years of experience at the helm, could continue to let such pieces of surplus fluff slip through the net.

Production, certainly for the past few DOKKEN albums, has been a big part of their downfall. "Hell To Pay" has a "rock" production of clarity, you could say — but if it had an ounce of fire and bite to it on top of that perhaps you wouldn't notice so many of the below par moments so much. "Prozac Nation", for example, would have been so much more of a credible mid-paced rocker if it its edges weren't smoothed right off. And even the best of the three-or-four up-tempo songs on here, "Don't Bring Me Down", cries out to be overdriven as its spiraling riffs snake through the track.

Oddly, it's left to the moody, BEATLES-esque "Letter to Home" to stand head-and-shoulders above the rest, from which you can deduce that DOKKEN are most certainly not, in the words of one of their Eighties success stories, back for the attack.