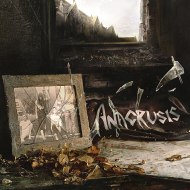 Back when dinosaurs roamed the earth and there was no such thing as Pro Tools, bands used to routinely sound like truckloads of dogshit when they first tried to record something. The equipment they had at their disposal was usually old, broken, or worthless, and most of the players suffered from the dreaded "red light syndrome," seemingly unable to put down a solid take of their part when the tape was rolling. Most of the time, the results were the trainwreck you'd expect, and the band either moved onward and upward and got better, paid someone to fix all their parts in post-production, or quietly broke up and became beer truck drivers.

Sometimes, though, the limitations of the gear at hand, the claustrophobia of being on your own dime in the studio, and the exuberant stupidity of youth combined to create accidental masterpieces. From the famous (NIRVANA cranking out "Bleach" in a day for six hundred bucks) to the underground (ASPHYX, ENTOMBED, dozens of others),occasionally heart would come to the surface in ways that might not have worked with the glossy studio tricks that money could buy at the time.

Perhaps no band embodies this phenomenon of low-buck miracles better than ANACRUSIS. From the outset, their take on thrash metal was progressive and thoughtful on one hand, manic and bludgeoning on the other. Their chaotic arrangements and furious playing (particularly the off-the-rails style of drummer Mike Owen) would have been hard to capture even for a top-notch producer in a state-of-the-art facility. Neither made themselves available to ANACRUSIS at the time, of course, struggling to be heard in the relatively isolated St. Louis music scene.

As a result, the already startling music on their first two albums, "Suffering Hour" and "Reason", was given an added layer of dark, swirling confusion by murky, muddy, shortwave-from-Mars production. To many in their small, diehard cult of fans, the claustrophobic aura of those desperate sessions only adds to the melancholy, brooding vibe of the material, especially on "Reason". But as even the best production jobs of the late 1980's begin to sound faint and dated on modern equipment, and remastering becomes the norm, it's not hard to see how the band would come to resent those rushed sessions and long for another crack at the bat.

Reformed for a European festival and some local dates, ANACRUSIS decided to put their rehearsals to maximum use and re-record the whole damn ball of wax, original lineup intact (Owen had split after "Reason", and the band's final two albums featured drumming by Chad Smith and Paul Miles, respectively). Released in a beautiful-looking digipak with classy artwork by Eliran Kantor (TESTAMENT),"Hindsight" seems bent on not only exorcising those sonic demons of the past, but even tackling another chronic ANACRUSIS frustration — crappy packaging (both original albums looked low-buck even by Metal Blade-circa-1990 standards). This thing folds out to reveal both discs, plenty of photos, lyrics, and liner notes to satisfy anyone obsessive enough to dive in.

So what did these geezers achieve, besides the chance to drink beers and shake the paint off the walls one more time? Well, for anyone just joining the party, these re-recorded versions will be infinitely more accessible and enjoyable than the muddy old original tracks. The band is tight, the instruments are clear, but they didn't overdo it with too much gloss and sheen — the guitar tone is similar, and Owen has only slightly reined in his mania for fills that seem nonsensically overdone, but wind up working perfectly. Vocalist Kenn Nardi is enunciating a little better these days, and sounds a little more, I dunno, grizzled, but his trademark shrieks are still in place, and his delivery is still as impassioned and forceful as it was back then — he remains a unique voice in metal history, atypical and compelling.

In short, they did it right — they didn't go in and rewrite solos, make the lyrics "more mature," or try to tack on any 2010 insights onto 1988's material. They went at it like they'd stepped outside in '88 for a smoke break, got caught in a two-decade time warp, and then walked back into the studio for another take. The end result breathes new life into twenty-two songs unfairly ignored by the metal masses, but kept close to the hearts of a faithful few all this time, and any fan of the band will be ecstatic at the chance for the revisitation.

Why only an 8, then? Well, besides the fact that number ratings are arbitrary and inherently goofy, there's the fact that no matter how awesome a 2010 incarnation of these albums turned out, nothing can replace the originals (both of which are only 10's because we're not allowed to go into triple digits). As much of a cannibal feast as Hindsight is, imagine a four-disc set, with remastered original versions of "Suffering Hour" and "Reason" on board! I don't know if it was record label dickery or a perceived lack of interest keeping these two albums out of print, but anyone still on board enough to enjoy these re-recordings would, I imagine, shell out the coin for both, given the chance.

All that said, if you're a fervent enough fan of ANACRUSIS to read clear to the bottom every time I write one of these book reports on them, you've probably already picked up "Hindsight" and are digging it immensely. If not, don't screw around — I believe only 1000 were pressed, and if history is any indication, ANACRUSIS stuff disappears from the shelves quicker than half the band's hairlines. Get it now or regret it later.