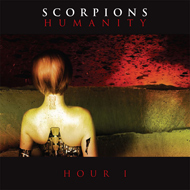 When reviewing a new album by a band, especially an established one, the album is usually judged first on its own merits and then in the context of its previous work. With that in mind, it's quite easy to say that "Humanity - Hour 1" is probably the best SCORPIONS album since 1990's "Crazy World". The veteran German outfit has been somewhat lost in the musical wilderness during the last 17 years, finally hitting bottom with "Eye II Eye", an ill-advised foray into electronic music. While they began pulling themselves out with the follow-up, "Unbreakable", the group has almost fully rebounded with "Humanity", a collection featuring both the kind of fist-pumping rockers and melodramatic ballads that earned the group platinum albums throughout the Eighties.

Having said that, one should keep in mind that this is a SCORPIONS album after all, and while the band gets surprisingly heavy (for them) on cuts like the down-tuned opener, "Hour 1", this ain't exactly NAPALM DEATH. This is well-crafted, pop-inflected hard rock, shimmering with hooks, occasionally overflowing with schmaltz (and perhaps a slow tune or two more than necessary),and polished to a shiny luster by producer James Michael and co-producer Desmond Child, the man perhaps held most responsible for the sickly power ballads that also dominated the Eighties. But the combination here brings out the best in the SCORPS.

Following "Hour I", with its fire alarm leads and ominous feel, the album settles into more traditional SCORPIONS territory, switching effortlessly from anthemic audience-rousers like the insanely catchy "321" to midpaced rockers like "The Game of Life" to tearjerkers like "The Future Never Dies", the kind of airborne ballad that once had lighters flaring up in arenas all over America during the SCORPS' heyday. Lyrically, the album also alternates between hope and despair, lending some of the material here a darker edge that balances the more pop-oriented elements of the record.

Founding guitarist Rudolf Schenker and longtime lead man Matthias Jabs provide a rich tapestry of crunchy riffs and crystalline leads, while singer Klaus Meine's voice is as soaring and powerful as it's ever been. When he improbably duets with SMASHING PUMPKINS frontman Billy Corgan on "The Cross", you can hear where Corgan got some of the influence for his own, more-whiny vocal style. The late-era rhythm section of drummer James Kottak and bassist Pawel Maciwoda anchor the band as securely as the great Herman Rarebell-Francis Buchholz backline of the earlier years.

Often spoken of in the same breath as heavier contemporaries like JUDAS PRIEST and IRON MAIDEN, the SCORPIONS nevertheless managed to handle both the muscle and the melody with a deft touch during the time of albums like "Lovedrive", "Blackout" and "Love at First Sting" (not to mention their earlier RCA output, which is still largely unknown in North America). If you were never a SCORPIONS fan, this will surely not change your mind, but for longtime followers of the group who have been wishing for a return to the glories of those classic Eighties records, it's safe to say (and you knew this was coming) that the SCORPIONS have recovered their sting.