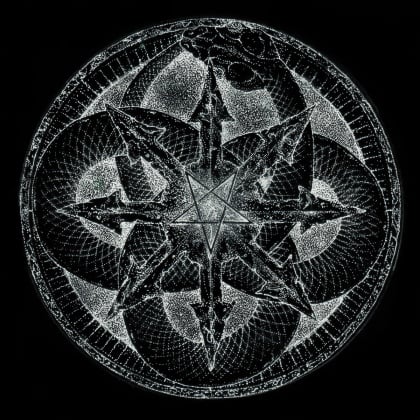 I Am The Void

Generally mentioned only as a footnote to the grand history of Scandinavian extreme metal, EUCHARIST released two seriously great albums in the '90s and have scarcely been seen since. 25 years have passed since "Mirrorworlds", an unsung benchmark for blackened, blasphemous melo-death, and band mastermind Markus Johnsson has made the sensible decision to not stray too far from that winning formula on EUCHARIST's long-awaited third album. The real surprise about "I Am the Void" is how much further into black metal territory they have travelled. There are certainly plenty of riffs and hooks that hark back to those formative years in the Swedish death metal scene, but this is a much more epic, ambitious and cold-hearted record than either of its predecessors. EUCHARIST were always hell-bent on unholiness, but thanks to a combination of improved musicianship and a refined vision (presumably) crafted over a quarter of a century, their 2022 incarnation hits with a vehemence and conviction that swiftly obliterates anything that went before.

Effectively a double album, "I Am the Void" has plenty of dynamic moments, but its primary focus is on eviscerating everything in sight with maximum, unholy spite, for 70 feverish minutes. Opener "Shadows" begins with a suppurating synth drone, before the first of countless, heroically evil riffs take things straight to fast-as-fuck Hell. EUCHARIST always sounded rabid and uncompromising, but the years have hardened this band's outlook to the point where everything they play sounds like all-out war, Johnsson's vocals dripping with vitriol throughout. Songs like "'Queen of Hades" and "In the Blaze of the Blood Red Moon" bristle with old-school animosity, but a glut of atmospheric heft adds mystery and depth to what could otherwise be wall-to-wall, profane blast-worship.

As "I Am the Void" progresses, the songs become more ambitious, and the prospect of an even more compelling future incarnation rears its head. The episodic, grandiose battery of "In the Heart of Infinity" is particularly stunning; while the title track's imperious march through howling storms of windswept and grandiose black metal scree amounts to the finest ten minutes in EUCHARIST's stop-start history.

Like being flattened by a giant, blasphemous bulldozer for an hour and ten minutes, "I Am the Void" heralds the return of a truly great band and another rusty spike thrust into the eye of Christ. No downsides here, folks.