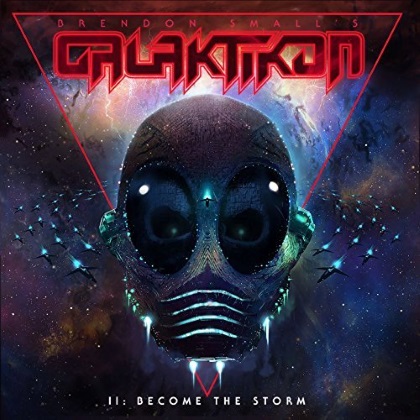 Where did five years go? Brendon Small is back, not that he ever left. "Metalocalypse" may have finally succumbed to a death it cannot revive from, though its co-creator's since found much to do in the way of comedy, animation, podcasting, guest shredding and so-forth. In 2012, Small debuted the first installment of what is bound to become another multimedia aspirant, "Galaktikon". Much in the vein of his virtual band offshoot DETHKLOK, Small takes his blistering, tech-heavy brand of death prog into this sequel album, "II: Become the Storm".

Once again featuring drummer Gene Hoglan and supplemented by the bass acumen of Bryan Beller, what you know about Brendon Small's musical projects in the past will serve you well here. "II: Become the Storm" is more of the same, yet beyond the jesting eye winks is a vastness to this album that's hard to overlook. Duck Dodgers never had such a heroic sound, even with the magnitude of the Warner Brothers orchestra, which gave Looney Tunes such a rich vibe behind the hilarity. Here you can parallel with Brendon Small.

You're compelled to chuckle at the goofy intro to the opening track, "Some Days Are for Dying", but beyond that is salient playing to the blustery thrash with Gene Hoglan's knee-straining blasts and Bryan Beller's rumbling bass. Brendon Small shreds and wolfs like a hyper cannon jockey annihilating everything in sight of an old-school game of Galaga. The scattershot keys add to the effect. There isn't much that slows in the next cut, "Icarus Six Sixty Six", no doubt a loving nod to IRON MAIDEN. The music grows grander beyond the neoclassical surfs whisking the listener to the feet of Thanos (Darkseid, if you're more DC),and ramming his lips to the celestial usurper's golden boot.

The amount of turf covered in "The Agenda" shows how far Brendon Small has come with his songwriting. While panting and heaving for much of the way with plummeting barrages from his collaborators, Small builds upon the wreckage and reduces the jokey effects initially stoked in this album. Scaling his snarls to cleans elevates "The Agenda" to a class level that even Nathan Explosion himself might have to defer to. Here, along with the 7:43 "The Ocean Galaktik", is where the album begins to morph into a metal opera, the latter's wading churns evolving through a gorgeous spread of cosmic nirvana. The vocal layers are as stirring as anything else spewed into "The Ocean Galaktik". Both Yngwie Malmsteen and QUEEN figure into this section of the album, along with the orbital tumbling throughout "Nightmare". It's not a bad thing, since Brendon Small is smart about how he utilizes these influences to magnify the increasing scope of his Galaktikon spectacle.

A gangbuster pound through much of "My Name Is Murder" follows, while drenching synths and swarming guitar play jazz up the slower death metal roils on "Become the Storm". The heaving mosh of "Could This Be the End" is a rump kicker even with the subliminal flippancy pervading beneath the punching groove. Yet the listener automatically knows where this song is heading. The ascending theatricality and glittery harmony turns "Could This Be the End" into a colossal carnival.

The concentrated march of "To Kill a God" is pretty intense, until Brendon Small lightens up the severity with twittering electronics and smarmy keys along the way. Nonetheless, the heat builds yet again toward the end of its partnered couplet, "Exitus". Somewhere in here, the suggested battle amidst such a prolonged mutiny was forgotten to be staged before the uplifting soar of the resolution number, "Rebuilding a Planet". Even Toki Wartooth might grumble "anticlimactic" under his breath.

Perhaps that's the in-joke, considering the omnipresent smarm of GALAKTIKON's creator. That, or we're certain to face another installment on the horizon. This is the age of the trilogy in entertainment. Give it to the guy, Brendon Small is supremely talented. You have to be when you voice a village of characters in an uproarious but complex cartoon series. To compose three Dethklok companion albums and now two GALAKTIKON pieces is frankly remarkable. To play at the level Small and his companions do defies the ability to come up with a simile for impressive. The themes may wear out a smidge, but otherwise, "II: Become the Storm" is a rollicking death metal oeuvre that would make even Chuck Schuldiner squeal from the other side.