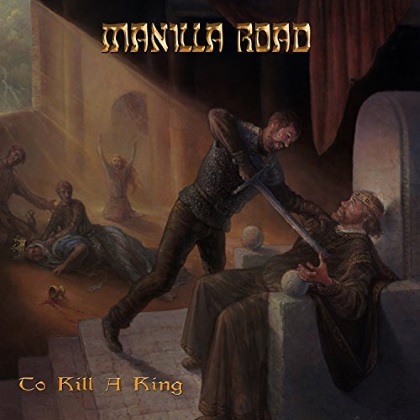 To Kill A King

Outside of the group's inactivity in the nineties, Mark Shelton has been slugging it out with MANILLA ROAD since 1977. One knows what to expect with the heavy metal band that's rightfully revered in the underground. Following the band's 1980 prog rock debut, "Invasion", its second proper album, 1982's succinctly and appropriately entitled "Metal", took on more of what's considered traditional metal's trappings. And from the proto-metal rumbling that saw its birth and earliest of days, the unit truly came into its own with the 1983 cult classic "Crystal Logic", almost universally regarded as the most shining jewel within MANILLA ROAD'S crown. They never made any left turns, and with album number 18—yes, you read that correctly—"To Kill a King", the group's delivered yet another reliable slab of epic traditional heavy metal. It's significantly more gloomy than 2015's "The Blessed Curse", augmented visually with virtuoso metal artist Paolo Girardi's portrayal of the murdering of a king.

The title track sets the album's tone with a bleak crawl threaded with a sense of drama and spiced with subtle and emotive acoustic guitars. Not unlike its early work, "To Kill a King" generally marches to the beat of a slower tempo, colored with the tasteful, nuanced work of drummer Neudi Neuderth. "Never Again" cascades forth with dreary qualities, midway picking up with a surge of metal power. The doom-like tendencies, as likable as they are, seem to be a little too prevalent in an album that exceeds an hour in length. Since the relatively more up-tempo material that the band began to cultivate progressively along its trajectory is largely absent, something is left to be desired for those familiar with the group's back catalogue. With that said, "Conqueror" and "The Arena" do pick up the pace and energy, breaking up what's otherwise simply too slow throughout.

Mark Shelton's work continues to gracefully dance through a variety of emotive sonic pastures in a way that showcases his immense talent while avoiding the common pitfall of similarly skilled artists who drown in the waters of misguided, aimless, self-absorbed noodling. In other words, his skill set is employed toward the demands of the song. The same can be said of his vocals, complemented by second vocalist Bryan Patrick whose pipes exude a similar kind of vibrato but with more clarity.

It will be hard for MANILLA ROAD to ever eclipse an eternal classic like "Crystal Logic", but that isn't necessarily the point. "To Kill a King" is a fantastic collection of songs that measures up well against the band's best output, and it outshines the bulk of the competition in the realm of epic, traditional heavy metal, regarding both old-timers and newcomers alike.