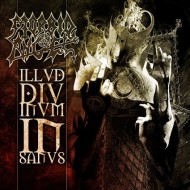 So after more than a decade, death metal icon David Vincent returns to his rightful spot in the legendary MORBID ANGEL and one of the world's most influential and important death metal acts ever are back to assault us with… uhmm… an industrial album??? A nu-metal album??? What the hell is this???

Given that MORBID ANGEL has never been a band to spin their wheels (an approach I generally applaud),it's no surprise that "Illud Divinum Insanus" is a universe apart from the likes of "Covenant" or "Domination", but was it really necessary to take a giant fucking death ray to your past?

The record starts out promisingly enough with the dramatic overture "Omni Potens". This is the type of music you'd expect to hear when you see Indiana Jones tied to a volcano with Trey Azagthoth rising up from the lava clad in the flesh and bones of those who oppose him. As Azagthoth approaches the adventurer, with dagger in hand, demanding that Indy bow to him faithfully, the rest of the band pops up and kicks into "Too Extreme!" Too extreme for what? I struggle to find the "extreme" in seven minutes of tinny, computerized drums "tink-tink-tinking" away underneath riffs leftover from MINISTRY's retirement party. Thank goat for "Existo Vulgore" and "Blades For Baal" for delivering something that resembles the MORBID ANGEL of yore. The same could be said for the one-two punch of "Nevermore" and "Beauty Meets Beast", which appears later in the album. Of the entire disc, these four are the songs that longtime will fans will latch onto most. Precision drumming, violently gruff vocals, breakneck riffing coupled with growly sections of doom-laden death groove all fueled by otherworldly aggression. But even these performances struck me as a bit uninspired and even if the band dumped blood, sweat and tears into these songs, that still wouldn't make up for the fact that a track like "Radikult" takes up space on the same album.

I'm a pretty open-minded dude when it comes to music, but "Radikult" would be ridiculous for MARILYN MANSON. Now imagine how MORBID ANGEL comes across as they lazily plod through a techo-infused abomination that features what I almost perceive to be Mr. Vincent's attempt at rapping. The bouncy and boring SOULFLY impersonations "10 More Dead" and "Destructos Vs The Earth / Attack" don't do the disc any favors either. They even take a stab at dark arena rock with "I Am Morbid". At least they found some words to rhyme with "morbid" (thwarted, sordid) for the chorus. I'll speak no more of this song. With closer "Profundis - Mea Culpa" we get some honest-to-goodness Azagthoth weirdness, but that comes wrapped up in a song that's almost too disjointed to enjoy. Still one of the album's highlights, though.

Nobody can really fault or criticize MORBID ANGEL for breaking away from their norm and releasing an album that throws the curveball of all curveballs at their fans.

As I said before, I applaud a band with the stones to break tradition and explore new ground; when it's done well. This, unfortunately, is not done well. As creative as these musicians have done in the past, I think we all expected even their most daringly different material to at least be engaging, if not provocative or challenging. None of these words could be used to describe "Illud Divinum Insanus".