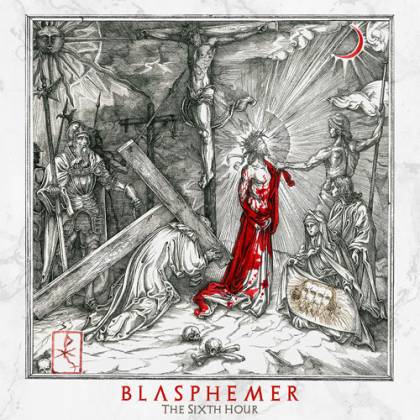 Death metal delivery, black metal atmosphere: it's a simple enough formula, but it's amazing how many bands borrow it without adding anything remotely new. Italy's BLASPHEMER are noisily bucking that trend here, however. "The Sixth Hour" carves an almost entirely new trench for the sonic blood to flow down, with levels of brutality that would give DEFEATED SANITY a headache, and a dense and deeply menacing overall aesthetic that somehow leads to a production job that is both hefty and harrowing. Fans of mind-blowing technicality will love this, too, but where many bands showboat themselves into a compositional cul-de-sac, BLASPHEMER are clearly students of the old school, and its songwriting principles in particular. They also really, really hate Christianity, not exactly a surprise, perhaps, but rarely has Jesus Christ's downfall been depicted with such malicious relish or with so many powerfully dissonant melodies.

Fans of VADER and KRISIUN will instantly embrace this stuff for its double-kick terrorism and general air of murderous grandeur, but BLASPHEMER have enough of their own character and charisma to forge a similarly impressive legacy to those bands. Not everyone will want to bellow along with the likes of "Hail, King Of The Jews!" and "Lord Of Lies", but there is so much of that early '90s death metal catchiness coursing through this album's veins that even when the Italians are in full heads-down blizzard mode, this never feels like an exercise in mindless bluster: listen to the swirling attack of "The Stumbling Block" for a lesson in refined violence with hooks to spare. Similarly, the title track owes a noticeable debt to MORBID ANGEL, but as the song switches from imperious intro to hellish verse, BLASPHEMER assert their own identity with maximum force, generating the kind of disquieting, bass-heavy churn that only the truly malevolent can conjure.

Yeah, this is the real, infernal deal and Jesus needs to prepare some devastating zingers if he's going to recover from this sacrilegious mauling. Buy two copies, then, and send one to Mike Pence. Hail.