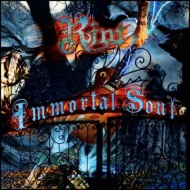 This is not the new and improved RIOT. It's the old and, well, you-be-the-judge RIOT of torchbearer Mark Reale (guitar),Tony Moore (vocals),Don Van Stavern (bass),and Bobby Jarzombek (drums). In other words, "Immortal Soul" features the lineup that performed on 1988's "Thundersteel" and 1990's "The Privilege of Power", albeit with the addition of second guitarist Mike Flyntz. That second axe was a necessary one too since "Immortal Soul" is an up-the-irons kind of melodic trad/speed metal affair and a fine addition to the RIOT catalogue.

RIOT fans should be giddy (and many are) over what the quintet has wrought with this one. The melodic speed metal tag gets thrown around a lot in describing this lineup's body of work and in the case of "Immortal Soul" it is partially true, as best evidenced by the album's number one barnburner "Riot" (yeah, it's a killer),as well as by up-tempo numbers "Wings are for Angels", "Insanity", and "Sins of the Father", but even those three contain significant elements of power/trad metal grandness. More than anything else, this is melodic heavy metal of varying speeds and moods and all of it is mighty tasty, the one possible exception being "Whiskey Man" and even that one gets the job done. Tony Moore's banshee-esque wails have aged well and the guitar work of Reale and Flyntz is fiery and elegant at once. Check out the sweet leads on the above noted "Sins of the Father". The triumphant chorus of "Still the Man", the classiness of the title track, and the epic shades of "Fall Before Me" are representative of a style closer to power metal than the traditional speed/thrashing variety. It's all relative, of course.

Dissections aside, the more important point to make is that through all of it "Immortal Soul" sounds like a RIOT album with roots reaching back to the '88-'91 era. The songwriting is consistently good, the melodies are strong, and the six-string power is formidable. It's good to hear an album like "Immortal Soul" released in 2011. The feeling of nostalgia goes well with the sound of finely crafted heavy metal that never sounds dated. Keep 'em coming!