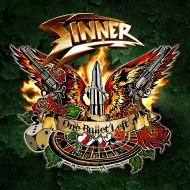 Bassist/vocalist Mat Sinner is all about the rock, and the metal for that matter; he's just an all-around prolific music veteran, whether PRIMAL FEAR, VOODOO CIRCLE, or his truest love SINNER. This time Mat brings a three-guitar attack with six-stringers Alex Beyrodt (PRIMAL FEAR, VOODOO CIRCLE),Christof Leim (THE NEW BLACK),and Alex Scholpp (TARJA, FARMER BOYS) to give SINNER's "One Bullet Left" and extra layer of riff crunch to go with all those THIN LIZZY twin leads and a powerful one-two punch from Sinner's bass and André Hilgers' (RAGE) drumming. SINNER has always been a solid hard rock 'n metal outfit and if it weren't for a handful of mediocre tracks, "One Bullet Left" would be a definitive example of that solidity.

Be that as it may, there are plenty of positives about "One Bullet Left", not the least of which is the ballsy, riff-based approach to melodic hard rock. Sinner's rugged voice is just good enough to carry a tune, provided the song itself gives him something with which to work. Songs such as "The One You Left Behind" and "Give & Take" perhaps best capture that riff-based toughness and melodic sensibility, as well as the smattering of THIN LIZZY bits (the twin leads) and Phil Lynott-isms (inflection, patterning, etc.) heard throughout most of the disc. On "Back on Trail" SINNER pulls out all the stops and goes for a full-on THIN LIZZY rocker that couldn't possibly be masquerading as anything else, and still ends up being one of the best tracks on the album. "Mend to Be Broken" follows a similar path, though doesn't work quite as well.

Aside from "Back on Trail" and a very good power ballad called "Haunted", SINNER is at its best when it is rocking the hardest. The cases in point are up-tempo riff monster "10 2 Death", the propulsive "Atomic Playboys", and the bad-ass swagger of the title track. The swings that result in misses on "Suicide Mission", "Wake me When I'm Sober", and "Mind over Matter" do hurt the overall effort; blandness the common denominator. Album closer "Rolling Away" is slick 'n and catchy, yet feels feel equally awkward and out of place. At least none of those tracks irreparably damage one's ability to enjoy "One Bullet Left". Tolerable does trump "bad" after all. The score is still impacted, but not enough to render "One Bullet Left" something less than a sturdy hard rock album. SINNER fans will dig it.