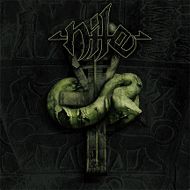 In Their Darkened Shrines

01. The Blessed Dead
02. Execration Text
03. Sarcophagous
04. Kheftiu Asar Butchiu
05. Unas, Slayer Of The Gods
06. Churning The Maelstrom
07. I Whisper In The Ear Of The Dead
08. Wind Of Horus
09. In Their Darkened Shrines (Parts 1-4)
I. Hall Of Saurian Entombment
II. Invocation To Seditious Heresy
III. Destruction Of The Temple Of The Enemies Of Ra
IV. Ruins

NILE are one of those bands who are immediately impressive. Whether they move you or not, their technical prowess cannot be disputed. The lengths to which they take their Egyptian concept are unbelievable. Their recordings are always the state-of-the-art in brutal death. The performances are exhausting workouts, from the blur of the strings to the always-impeccable drumming. It just depends on how over-the-top you want your brutality. And while there are some super-enjoyable moments on this album, it's not one I can highly recommend unless you're an untiring connoisseur of overtly brutal, brutal death metal. At the end of the album, all the great riffing twists and turns and mindblowing velocities and numbing rhythms are snuffed out by their love affair with the brutality. It all gets a little flattened, a little overdone. NILE has an epic streak in them, from the lengths of the songs to the lengths of their riff phrases. See "The Blessed Dead" and "Churning The Maelstrom" for typical NILE-istic strengths. But their reliance on blast, bellow and BBBRRROOOAAAGGGHHH!!! tends to totally drown all of NILE's finer assets.

Two glimmers of hope show the kind of NILE record I'd like to hear: 1) the final four-part title track. It winds down the album with a heavier reliance on symphonic/soundtrack-ish elements. Suddenly there's more color to everything as opposed to the gray barrage of the album's first half. 2) The magnificent "Unas Slayer Of The Gods". This song owes more than a nod to CANDLEMASS' "The Well Of Souls". It, in fact, begins with one of the signature riffs from that godly doom anthem, and it is weaved throughout the song's exhausting 10-minutes, morphed to fit different tempos and attacks. An interesting use of past metal tomes in writing new ones. (Despite not receiving any credit, I hope Relapse is paying royalties to Mr. Leif Edling!) Even the original riffs and overall vibe of this song impress all the way through. Whoever crafted the solo that begins at the six-and-half-minute mark, Karl or Dallas or both, take a fuckin' bow. Wow. I won't be surprised if hardcore NILE fans (and they have many) name this as the band's best-ever track, now and 10 years from now.

My biggest complaint with this band (and 100s of similar others) is the lack of personality in the vocal department. Ironically, of the five people credited with vocals (the three core members plus two guests),the entire vocal spectrum here is utterly without character. It's pretty typical stuff. I'm probably one of few who wishes NILE would turn down the blackwind attack a little and capitalize more on the technical and melodic intricacies in their sound. I'm not calling for them to get wimpy, but they seem ready to separate themselves from the KRISIUNs, HATE ETERNALs and INCANTATIONs of the world and go somewhere totally new. As of now, despite very obvious differences, they still sit well within that sphere, that very boring sphere. After all, what I'm left with after each listening of In Their Darkened Shrines is CANDLEMASS' "The Well Of Souls". Indeed, I'll be reaching for Nightfall (again) way more than I will this record.