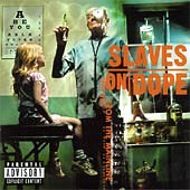 Inches From the Mainline

The first signing to Sharon Osbourne's Divine Records label, SLAVES ON DOPE are a generic, tuneless exercise in by-the-numbers pimprock that never manage to establish a sound of their own, coming across instead like a second-rate variation of all the trendy sounds that are popular on the L.A. rock scene.

Originally from Montreal, California-based SLAVES ON DOPE are competent enough musicians, and their Thom Panunzio-produced album is certainly not lacking in the sonic department, featuring a production that is not a million miles removed from that of the DEFTONESAdrenaline CD. However, the group's testosterone-driven sound gets old very quickly, with vocalist Jason Rockman's largely one-dimensional screaming only occasionally interspersed with a more melodic approach, adding a small dose of dynamics to what is an otherwise texture-deprived offering.

In the grand scheme of things, SLAVES ON DOPE is nothing but a minor-league player in an oversaturated scene that has been bled dry through the recent commercial success of the genre's forerunners. While I've heard much worse, Inches From The Mainline is simply not good enough to raise the band above the standards set by the bulk of their competition, and it doesn't bode well for SLAVES ON DOPE's chances of survival once the ongoing pimprock explosion has finally (and inevitably) blown over.