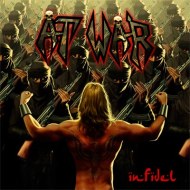 War, what is it good for? Lyrical inspiration for metal bands, that's what. Just ask AT WAR, what some might call the JUNGLE ROT of thrash metal. Sensing the time was right in this era of the old-is-new-again thrash resurgence, Virginia's AT WAR finally follows up its 1988 release "Retaliatory Strike" with a dandy called "Infidel", most appropriately released on old-school metal label Heavy Artillery.

So what's changed since AT WAR's run in the 80s thrash underground? Lyrically, hardly a damn thing; the themes continue to revolve primarily around that of hawks proudly killing doves. Giving peace a chance has never been an option for the trio. And as one might guess from an album cover graced with a shirtless Caucasian fellow staring down an army of Islamic militants, the guys make no qualms about their opinions on the necessity of continuing America's war on terror. In the liner notes under a section called "At War Believes In", the band even rattles off a list of beliefs that includes "The second amendment as a human right", "a strong national defense and less government", and "the unwavering pride and good fortune to be born in the U.S.A." Jingoistic? You make the call. But in deference to the first amendment, we'll not go there.

As for musical changes, I couldn't tell you, as AT WAR flew under my radar during the '80s, but I'm sure the diehards will weigh in. What I can tell is that the stripped down and ballsy "Infidel" is pretty good stuff, if not an album that will rise to the top of Heavy Artillery's impressive roster of acts. The approach is tight 'n tough and the songwriting is rather catchy. The lead vocals of bassist Paul Arnold are husky and enunciated, his style reminding me at several points of former USURPER throat General Diabolical Slaughter. Many of the tunes — "R.A.F." and "Rapechase" especially — are heavily MOTÖRHEAD (Bronze-era) influenced and benefit because of it, while highlight "Semper Fi" has a pronounced Belladonna-era ANTHRAX vibe (Arnold's grizzled shout of "Ooh Rah!" during the song is deceptively infectious and gets my attention every time).

More than a few '80s bands that re-launch after a long period of inactivity release a comeback album that tarnishes the memory of the salad days. AT WAR isn't one of those bands and "Infidel" isn't one of those albums. Then again, maybe they are and maybe it is, as I've not heard the old albums. Eh, what difference does it make? I like it.