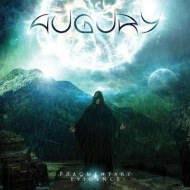 "Fragmentary Evidence" is 55 minutes of progressive death metal from a band that assuredly put a lot of blood, sweat, and quite possibly tears into this long-awaited follow-up to 2004's "Concealed". More than just a dazzling display of technical expertise, Montreal's AUGURY craft compositions of unbridled aggression around which is wrapped genre-expanding detours and memorable melodies that maintain a clear view of the forest despite the number of trees.

Unlike a standard tech-death release that forces melody through a hurricane of arpeggio sweeps, constant angularity, and an all-but-the-kitchen-sink mentality, often at the expense of personality and heartfelt expression, AUGURY writes songs with individuality that belies the compositional density. In other words, there is a hell of a lot going on in these songs, but listener attentiveness seldom gets lost in a frenetic shuffle of notes. That doesn't necessarily mean that "Fragmentary Evidence" is immediately grasped or that some absorption isn't required through the first or second spins to fully wrap one's head around the complexity. It also doesn't mean that the album doesn't occasionally seem a bit much, particularly if one is not of the mind for such intense musicality. It simply means that by and large "Fragmentary Evidence" impresses for an ability to keep the song front and center, regardless of technicality or epic song length.

In addition to the otherworldly bass work of Dominic Lapointe — he's the star here — and the brilliant guitar playing of vocalist Pat Loisel and Mathieu Marcotte, "Fragmentary Evidence" features several great songs where melody is buttressed with vocal variation, CYNIC-like flourishes, and pointed genre-straddling. Where the combination stands out most is on "Simian Cattle" (with contrasting mid-range vocals from ABORTED's Sven de Caluwé),"Orphans of Living", "Sovereigns Unknown", and "Brimstone Landscapes" during which the band utilizes folk/pagan singing sections that impact in refreshing manner. "Skyless" then takes a somewhat different route with sections that approach European doom and a musical tapestry that comes off like OPETH crossed with NOVEMBERS DOOM crossed with NECROPHAGIST, while "Oversee the Rebirth" is especially proggy with acoustic guitars and gritty clean vocals. There is of course plenty of classic progressive/jazzy death coursing through the album's veins, bringing to mind everyone from DEATH to the aforementioned CYNIC.

"Fragmentary Evidence" is a musical stew that allows one to taste the uniqueness of the blend without sacrificing specific flavors. Maybe not destined to be a prog/tech death hall of fame inductee, but definitely one of the better examples of showmanship with a purpose you'll hear this year.