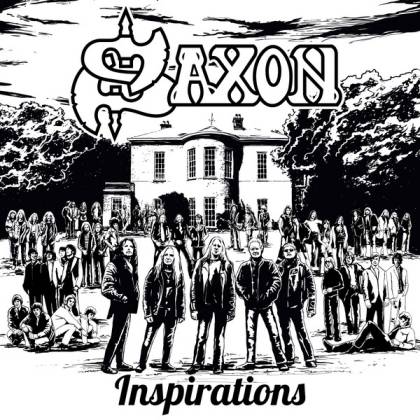 Covers albums are a risky business. There are, of course, lots of great examples of the form, and we all enjoy the healthy dismantling and reconstruction of a classic every now and then. On the other side of the mimicry coin, however, there have been lots of truly dismal covers albums over the years, none of which deserve to be mentioned here.

Fortunately, SAXON are a band of sufficient vintage and legend that they have absolutely no reason to explain anything they do at this point. "Inspirations" is very obviously a record that was bashed out and glued together during lockdown but sounds every bit as energetic and powerful as you might expect from the British veterans. If there is one tiny downside to the whole thing, it's that the band's choice of songs is all so screamingly obvious that it's hard not to wonder why they couldn't have come up with at least one curveball along the way. Observant fans could arguably have predicted at least eight of these 11 tunes, and even the mildly surprising likes of TOTO's "Hold The Line" and THE KINKS' "See My Friends" are firmly within the classic rock arena.

But then, as is so often the case with SAXON, the sheer, mad-eyed exuberance of the whole thing grabs you by the fundamentals and jettisons all cynicism with a chuckling flourish. Clearly having as much fun as they've had in years, this is a looser, less precise SAXON than we generally hear on their studio albums, but it's also a showcase for the band's resolute chemistry and, more importantly, their unabashed, shared love for these songs. It's also an absolute joy to hear Biff Byford singing the likes of "Immigrant Song" and "Speed King": songs that evidently influenced his own vocal approach, but which he sings, brilliantly, with an audible twinkle in his eye, very much on top of the job throughout. Similarly, when Biff takes on AC/DC's "Problem Child" or THIN LIZZY's "The Rocker", he sounds squarely in his element, saluting his heroes but also contemporaries from SAXON's early days.

With only a re-worked and slightly stilted rendition of Jimi Hendrix's "Stone Free" missing the mark, "Inspirations" may be an unapologetic stopgap, but it's also a vibrant and brashly entertaining collection of blasts from the past. It's hard to imagine anyone else getting away with it, but this is SAXON: the finest covers band in the world (this week).