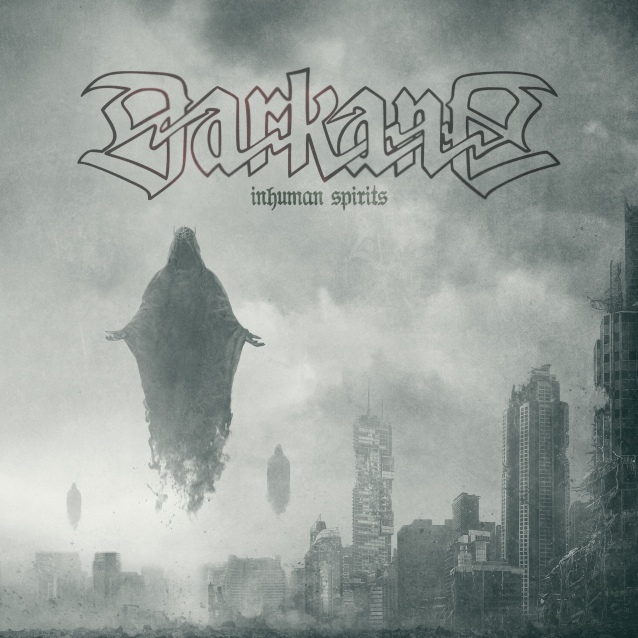 01. Inhuman Spirits
02. Awakening
03. Embrace The Flames
04. Conspiracies Of The Flesh
05. Inhaling Mental Chaos
06. Mansion Of Torture
07. The Quintessence Of Evil
08. A Spiral To Nothing
09. The Great Deceiver
10. Vålnader

These are heady days for fans of melodic death metal. Not only have IN FLAMES just released their best (and heaviest) new song in at least 15 years, but this often neglected but stubbornly persistent subgenre is throwing up all manner of new and rejuvenated exponents of this noble artform. It is particularly gratifying to see DARKANE back in action. One of Sweden's classiest and most imaginative melo-death bands, the Helsingborg crew have never quite shrugged off their cult status, but their music exudes authority. Their first album in eight years, "Inhuman Spirits" is a clever piece of work that manages to tap into the spirit and sound of old-school melo-death while confirming that DARKANE's subversive streak is alive and well.

More importantly, this record absolutely rips. There have been times in recent decades when melodic death metal has strayed so far into shiny, pop-friendly metalcore territory that the whole brutality-plus-melody formula started to stink. Fortunately, away from the mainstream (and particularly in Scandinavia),  the real essence of the genre has been nurtured and protected, and "Inhuman Spirits" is a testament to its ongoing rude health.

The opening title track is a perfect example: simultaneously old school and futuristic, it pitches frontman Lawrence Mackrory's ragged bark against a gleaming, hook-heavy backdrop. An inspired combination of the ruthlessly direct and the gently progressive, it gives metal's cutting edge a casual polish and revels in the subsequent shine. "Inhaling Mental Chaos" is equally sharp and devastating, as vicious intensity collides with deftly executed vocal harmonies. Elsewhere, DARKANE are eminently capable of slipping some brutish thrash, sinewy tech-death or gothic grimness into an otherwise avowedly tuneful brew. "Conspiracies Of The Flesh" is a masterful slab of groove metal grit, with a swaggering percussive pulse; while "The Quintessence Of Evil" is a dense, destructive prog (death) metal mini-epic, wherein enduring guitar duo Christofer Malmström and Klas Ideberg do battle with surging keys and another versatile Mackrory vocal.

For those seeking a more straightforward melo-death dose, "A Spiral To Nothing" and "The Great Deceiver" are this album's most unapologetic salutes to an old code. DARKANE have audibly factored two decades of like-minded music into their comeback, but the Swedes' fierce individuality continues to steer them away from cliché and towards something a lot more interesting. "Inhuman Spirits" may remind devotees of melodic death metal's pioneering glory days, but DARKANE remain an intrinsically forward-thinking force.