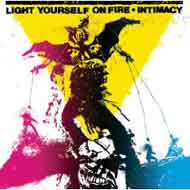 LIGHT YOURSELF ON FIRE

Tampa's LIGHT YOURSELF ON FIRE has followed up 14 minutes of CONVERGE-ish/UNSANE-ish metalcore on its self-titled debut EP (on Kiss of Death) with 17 minutes of it on sophomore effort "Intimacy". Either they run out of ideas quickly or decide that a quick shot of heavy is better than 35 minutes of overkill. Not opting for the longer option was a good choice. Though "Intimacy" offers a lot of crunch and some groovy moments, much more than 17 minutes would have resulted in a snooze fest.

As it stands with the current running time, "Intimacy" still doesn't give one much of a reason for repeat plays. In fact, the 6.5 score awarded to the debut effort seems generous now. The sandpaper riffs and bloody, UNSANE street rat vibes make it only a hair better than average. The one attribute of the music that shows potential is the deft use of shifting grooves, as well as the little touches like the light-picking-with-samples section during "Montag". Abrasive, knotted, and angular are all good qualities in the context of these arrangements, but taken as a whole, there isn't quite enough to keep the listener coming back for more.

Lyrically, there is more to offer. The band explores the philosophical ideas of folks like Kierkegaard ("New Bay Girl"),Albert Camus ("Love and Death"),and Jean Paul Sarte (the title track). On "Five Blows" the topic is the 2004 hurricane season and on "Montag" Florida's education system (ranked 47th in the U.S.). In each case, the lyricist offers an explanation of the ideas contained therein. It is still not enough to make "Intimacy" anything close to a mandatory purchase though. This isn't a bad EP and at various points it is one that I wanted to like more than I did, but a little better than average isn't reason enough to plunk down the bucks for it.