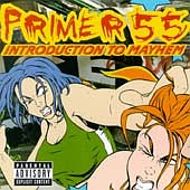 Hailing from Memphis, PRIMER 55 is one of Island/Def Jam's first forays into the rap/metal genre, and to these ears, it is a rather unspectacular one. Boasting a sound that can best be described as a heavier, more aggressive early LIMP BIZKIT, PRIMER 55 are by-the-numbers rapcore that invariably revolves around quieter, "rappy" verses and all-out, in-your-face choruses that are, for the most part, interchangeable. Credit should go out to the band for incorporating metal-tinged moshcore overtones into their songwriting (in the way of BIOHAZARD-style "dance" parts),which help distinguish PRIMER 55 from the rest of the rap/metal pack, but there simply isn't enough on the offer here to warrant further interest beyond the initial listen. The truth is, it's been done before, and done much better.