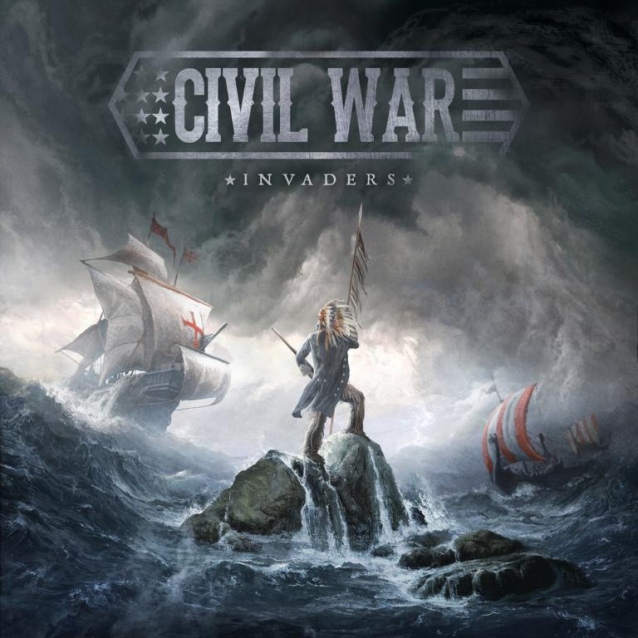 Four albums in, and CIVIL WAR are still peppering their press releases with references to SABATON. It makes sense, of course. Founded by two former members of the Swedish heavyweights, and instinctively tethered to the same broad concepts, they have also welcomed former SABATON guitarist Thobbe Englund into their midst. A more significant development, one might argue, is the recruitment of new vocalist Kelly Sundown Carpenter, who replaced the departing Nils Patrik Johansson in 2017, and whose spectacular performance lifts "Invaders" to heights barely suggested by the Swedes' previous albums.

Never the SABATON clones that their much-mentioned affiliation suggests, CIVIL WAR should perhaps have more confidence in their own identity, because this feels like a mixture of defiant consolidation and audacious upgrade, with close to nothing owed to anyone else.

Opener "Oblivion" is a wild and rousing thing. CIVIL WAR eschew the clipped precision of much modern power metal for a deeper, richer and more volubly epic sound, often sprinkled with unexpected keyboard shades or bursts of quasi-orchestral pomp. When combined with Carpenter's none-more-classic vocals, which have an undeniably DIO-esque hue to them at times, the end result shares as much with Tony Martin-era BLACK SABBATH as it does with anything more contemporary.

There are some glorious songs here, too. "Dead Man's Glory" is a punishing squall of pathos and pessimism; "Andersonville" tells the tale of a brutal, Confederate-era prisoner-of-war camp via the darkest of monster ballads; "Warrior Soul" is an unashamedly direct power metal anthem with a thinly veiled, haunted heart, like NOCTURNAL RITES jamming in the underworld. Elsewhere, "Slaughterhouse 5" plunders Kurt Vonnegut's legendary dark satire for a wildly exhilarating eruption of prime prog metal bluster, replete with whistling Moogs; "Soldiers and Kings" sounds exactly like a song called "Soldiers and Kings" should, but with the billowing aura of a thousand slain souls balancing out the spine-rattling aggression. On a more upbeat and uplifting note, "Battle of Life" is four minutes of pure, melodic metal euphoria; while a bonus cut re-recording of "Custer's Last Stand" (originally on CIVIL WAR's first, self-titled EP, released a decade ago) turns the clock back to 1876 with rather more cinematic flair and SAXON-like grandeur than on its earlier incarnation.

Compelling from atmospheric start to bullet-ridden conclusion, this is CIVIL WAR's strongest album by some distance.