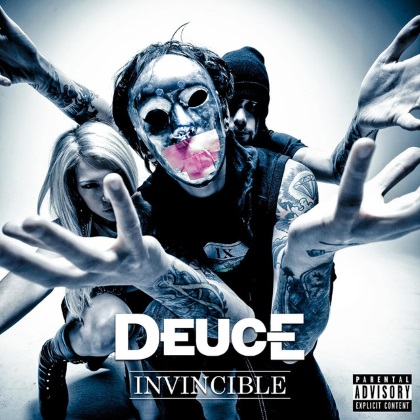 If you're Aron Erlichman, your HOLLYWOOD UNDEAD years must seem a lifetime ago, ditto for when he first laid down the tracks to his second solo album under his alter ego, "Deuce". The fourteen songs on "Invincible" were laid down five years ago, and due to legal entanglement, they're just now emerging as an official release. Albeit, if you were keeping tabs on Halloween in 2015, the masked rap-rocker briefly leaked "Invincible" for free.

Assuming you know what this cat is about, one of the reasons for "Invincible"'s delay is the gangbanging, uber-profane matter Deuce slings upon it. What worked all the way to the bank for Eminem wasn't viewed as a worthy commercial risk by Deuce's former label, A&M/Octone. While Slim Shady remains a Gen Y hero, the fact is, most of Eminem's demographic has grown up and joined mainstream nuclear family America. Eminem is sadly Nostalgiaville now. White rap had its sometimes glorious, sometimes awkward time, whether you're talking Eminem and LIMP BIZKIT or more underground flavor like THE STREETS and Lucas. Thus, "Invincible" is a bit out of its hot dog flavored water element, but that doesn't mean a new generation isn't available to latch onto what Deuce has to say, much of it cast in derision toward the music game.

Remember that Deuce can play guitar on top of sing and rap, which helps give "Invincible" a fairly stout rock palette. His Nine Lives backing crew consists of Jimmy Yuma (guitars),Arina Chloe Erlichman (keys and backing vocals),Tye Gaddis (drums),James Kloeppel (rhythm guitar and bass) and hype man/vocalist Anthony"Gadget"Leonard. What Deuce does in unequivocally classified as rap rock, though this album exhibits a few neat turns. RAGE AGAINST THE MACHINE, CLAWFINGER, P.O.D. or BODY COUNT this is not, but it's not a HOLLYWOOD UNDEAD hangover, either, even if does hint of Deuce's alma mater in spots.

Deuce tells you he's never done and he's never gonna change on "Here I Come", let the expected f-bombs drop where you figure they will. The guitars come subtly, then more loudly as the song gains steam, whereas they're shoved full-frontal on "Hell's Gonna Break Loose" and later, "Bad Attitude". If you're the right age and still laced with piss and vinegar, then Deuce's gutter-minded Johnson swinging and snarls on "Hell's Gonna Break Loose" will chime in your ears to the tune of colorful edicts such as "I fucking hate you, I thought you pussies knew." Even if you wish Fred Durst was still the crowned king of nu-metal, you'll get on Deuce's dick here, as you will on the rap rock eulogizing title track. Otherwise, this overtly crude and nasty business is ill-advised. "Bitch This Is It" afterwards, what further warning do you need?

One of the more agreeable songs, "Gone Tomorrow Here Today", works from a snappy melody playing foil to Deuce's tirade against false friendships. If you listen up, he spills a smidge of repentance while fanning the flames of his internal combustion. The rhythm is fierce, the riffs take a larger role and gives "Gone Tomorrow Here Today" a proper flex to the point you do want to sing along with the guy. Immediately thereafter, "World on Fire" is surprisingly sober with saving grace acoustic spools serving up a prevailing, seemingly intentional weariness. Deuce's rap tumbles instead of pounces on this one, like he's gnashing through a post-slam headache.

You just know Deuce would cream his money jeans if Eminem himself showed up onstage to pair off with him on the loud, swaggering "My Buddy". This one yells with zero conscience like a would-be theme song for David Ayer's gangsta-Joker in "Suicide Squad". "Best of Me" and "Thank You", however, gives Deuce the opportunity to redeem his own beleaguered soul, particularly the latter cut, upon which he fully sings (and pretty niftily, at that) overtop a ballad, of all things. Equally surprising is the straightforward rocker thereafter, "Catch Me If You Can", which is a pretty cool diversion, though not as assertively brazen and knotty as the BEASTIE BOYS's flawless sojourns into punk and hardcore: "Holy Snappers", for example. Giving Deuce a deserving hand, though, the bro-down beat behind the pumped-up rocker "It's Alright It's OK" is the album's finest hour.

Positively, Deuce keeps a tight and lean approach to these songs, thus "Invincible" rolls through pretty quickly. Yeah, we get it, Deuce is pissed off at life, even more pissed by the circumstances it took to release "Invincible". For his fans, his cock-sparring angst is meant to spit upon the feet of the music industry and anyone who's ever crossed him. We live in a jaded, no-holds-barred world, particularly in entertainment. It carries a swollen, bloodthirsty facade ushered in by "Fight Club", which has changed pop culture indefinitely since it came out at the dawn of the new millennium. In that outrageously nihilistic world, anyone with the stones to knock teeth, be he clad in shirt and tie or in rapper swag, is invited to unleash his tormented id, so long as he treats the first two rules as creed. What "Invincible" offers is hardly in ideological harmony with "Fight Club", much less the hipster electro strut emitted by the DUST BROTHERS, but you get the sense Aron Erlichman spent equal time soaking it up like canon along with "8 Mile". "Invincible" wishes it could the best of both.