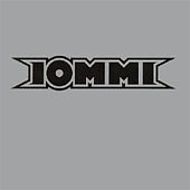 When your name is Tony Iommi, virtually every metal musician will practically bend over backwards to collaborate with you in any way that they can, so it only follows that the list of guest stars appearing on this CD is a rather impressive one. Featuring ten songs and contributions from the likes of PANTERA's Phillip Anselmo, SKUNK ANANSIE's Skin, SYSTEM OF A DOWN's Serj Tankian, THE CULT's Ian Astbury, TYPE O NEGATIVE's Pete Steele, SMASHING PUMPKINS' Billy Corgan and FOO FIGHTERS' Dave Grohl, Iommi is unsurprisingly chock-full of riffs and musical passages that would have fit very comfortably on any classic BLACK SABBATH album, with one track in particular—"Who's Fooling Who", featuring Ozzy Osbourne on vocals and Bill Ward on drums—sounding far more faithful to the group's early sound than was the case with the two studio songs that appeared on SABBATH's platinum-selling Reunion CD.

Ironically, it is album opener "Laughing Man (In the Devil Mask)" that is the most "different" sounding cut on the offer, its HELMET-like stop-and-go main riff and Henry Rollins' tuneless vocals giving it a completely '90s feel that has little in common with Iommi's doom-riff legacy. Elsewhere, we have Dave Grohl providing a touch of commercialism in the shape of the pop-flavored "Goodbye Lament" (the album's first single),Pete Steele doing his usual goth thing over "Just Say No" (originally recorded with COLD's Scooter Ward and titled "Something Wicked This Way Comes"),Billy Corgan attempting his best Ozzy impersonation on "Black Oblivion", and Phillip Anselmo performing some of his patented screams in "Time Is Mine".

Although not quite the instant classic that many had hoped for, Iommi is a SABBATH fan's wet dream and a mandatory addition to any serious metalhead's collection.