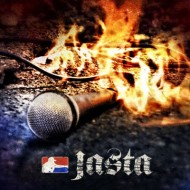 01. Walk That Path Alone
02. Mourn The Illusion
03. Screams From The Sanctuary
04. Nothing They Say
05. Anthem Of The Freedom Fighter
06. Something You Should Know
07. Set You Adrift
08. Enslaved, Dead or Depraved
09. With A Resounding Voice
10. The Fearless Must Endure
11. Heart Of A Warrior
12. Death Bestowed

Apparently, Jamey Jasta (HATEBREED, KINGDOM OF SORROW didn't have enough outlets available to get across his music and message. So why not a solo album? Well, you'll be damned! That's the same question he surely asked. Composed during the 2008-2010 period, Jasta has indicated that his namesake project was a vehicle for material that is often more thrash-based and rocking. The thrash basis is present for many of the tunes, though typically not far removed from the metallic hardcore of HATEBREED and the rock is…well, it's more like mainstream modern metal, complete with Jasta's respectable foray into actual singing.

All in all, the effort is a solid, if not overly memorable one. Unsurprisingly, it is the tunes that are closest — in some cases interchangeably so — to Jasta's work in HATEBREED that work the best. "Walk that Path Alone", "Anthem of the Freedom Fighter", "Enslaved, Dead, or Depraved" (featuring ferocious vocals from LAMB OF GOD's Randy Blythe),"Heart of a Warrior" (with pro skateboarder Mike Vallely),"With a Resounding Voice" (featuring AS I LAY DYING's Tim Lambesis),and "Death Bestowed" (with LAMB OF GOD's Mark Morton) all fall into that category in one way or another. The more melodically-based material on which Jasta brings his mid-range cleans is fairly successful on "Mourn the Illusion" and a tough customer called "Screams from the Sanctuary", decent on "The Fearless Must Endure" (with Zakk Wylde's ace soloing),generally generic on "Nothing They Say" and "Set you Adrift", and forgettable on "Something you Should Know", which features ALL THAT REMAINS' Phil Labonte.

On the whole then JASTA's leap into the solo world offers plenty of positives and an acceptable amount of negatives. That may not make it an automatic purchase, but it does stop short of being mired in mediocrity. It's not a big stretch to think that devoted fans of HATEBREED and KINGDOM OF SORROW would like a sizeable chunk of this one, while the material that some of those same fans may choose to skip at least — for the most part — offers some value.