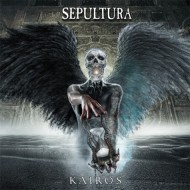 I hesitate to even highlight it for fear of perpetuation, but it is a point worth making. I'm referring to the level of scrutiny every SEPULTURA album since "Against" has gotten, most of which comes down to an inability to avoid mention of a certain former singer, regardless of how long he's been out of the band. Add to that more recent comparisons to a certain former drummer who was replaced by Jean Dolabella on the exceptional "A-Lex" and the shadows of SEPULTURA's past become even more prominent in the context of critical review. Even BLACK SABBATH's post-Ozzy era albums were not subjected to this kind of microanalysis.

Rant complete, we can now move on to "Kairos", another strong, albeit stripped down and direct album that is a mild disappointment only in comparison to its gargantuan predecessor. Otherwise, what we've got here is full throttle SEPULTURA without the expansive trappings of either "A-Lex" or "Dante XXI". Thematically, the album title refers to a certain type of time interval, the loose translation of the ancient Greek word "Kairos" basically referring to opportunities that present themselves during just the right times in all the right places. The brief interludes located through the album are a direct tie to that theme.

Kicking off with "Spectrum" doesn't exactly bring to mind images of sprinters bolting out of blocks, but the steady chugger does work within the larger album scheme, almost as the first part of a two-part build that includes a tenser title track. What comes is an engine called "Relentless" that is now barreling down the tracks and hauling with it a blistering riff and some ridiculously hot soloing from Andreas Kisser. The rest of the way is pretty smooth sailing in that the approach is kept uncomplicated, which only makes the smattering of changeups on songs like "Dialog" (Derrick Green's deep, spoken vocals),"Mask" (the speedy ascents) and "Structure Violence (Azzes)", during which mechanistic clatter meets tribal stomp, awfully damn powerful. A higher level of fierceness is found on "Seethe" (Kisser wails as though his life depended on it) and the thrash gets outright savage on "No One will Stand", while "Embrace the Storm" and "Born Strong" stand out a smidge for their choruses. The decision to include a cover of MINISTRY's "Just one Fix", much less so early in the album is a little strange, though it isn't ill-fitting either. I suspect busting that one out live would go over a storm. The cover of THE PRODIGY's "Firestarter" is one of a couple of bonus tracks included on the special edition; it's entertaining.

By this point you'll recognize that the basically bare bones production of Roy Z combined with a no-frills approach gives "Kairos" a certain metallic purity that is refreshing in this age of mix-and-match, layered to death genre-splitters. This is SEPULTURA's own unique take on thrash metal and it relies on a riff, a beat, and a bark to drive its point home. That's what matters most here.