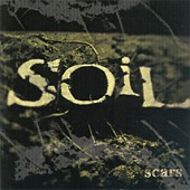 It doesn't seem all that long ago that Chicago's SOIL were struggling to get themselves heard amid a sea of LIMP BIZKIT and KORN wannabes whose musical output was deemed far more “marketable” than the southern rock-tinged sounds practiced by the Illinois quintet. All that changed when a radio programmer in Orlando, Florida, Pat Lynch of active rock station WJRR, started spinning a demo version of SOIL's song “Halo” (taken from an August 2000 three-tracker),and propelled it to hit proportions in the local area, in the process sparking a label battle that was ultimately won by J Records (headed by former Arista head honcho Clive Davis).

SOIL's second full-length offering, Scars is essentially a continuation of the sound first heard on the group's 1999 debut album, Throttle Junkies (issued via the now-defunct MIA Records and produced by none other than Steve Albini of the NIRVANA, PLANT & PAGE, and NEUROSIS fame),but with a more streamlined, focused approach, which has ultimately rendered SOIL's material more commercial than was the case in the past. The production, handled this time around by DISTURBED/MACHINE HEAD knob-twiddler Johnny K (who was also at the helm for the aforementioned demo),is sterling, and the material is consistently strong, if not all-out amazing, with most of the tracks revolving around the excellent guitar work of former BROKEN HOPE/SINDROME bassist Shaun Glass and Adam Zadel and the raspy, throaty delivery of vocalist Ryan McCombs, who has lost nearly all of his blatant Layne Staley-isms that had plagued his style earlier in the group's career.

Despite strong backing from J, it's hard to see SOIL making a breakthrough at a time when a sugar-coated brand of pimprock and a more eclectic form of nu-metal seems to be ruling the rock airwaves. Having said that, SOIL have made an impressive album that deserves to be heard, and with a bit of luck on their side, they could very well be the band to beat the odds.