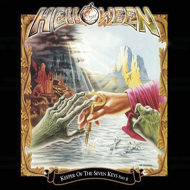 Anyone still crying about the 10 that "Keeper of the Seven Keys, Part I" got last week, please purchase another box of tissues before reading further. If it was possible to give this record an 11, I'd give it one — the first two "Keeper" albums are essential landmarks in heavy metal history, indisputable masterpieces, and touchstones that launched the dreams of a thousand next-generation bands. "Part II" is both sillier and more serious, catchier and more complex, and it set the band on a course for greatness (a course upon which they promptly foundered, but that's another story).

Recorded after "Part I"'s staggering success (not at the same time, as some have said),"Part II" shows off a bigger, more arena-ready production (arguably a step backward from "Part I" — guitarist Michael Weikath, among others, preferring the sound of the earlier album). After the obligatory big fancy intro, it blows up right away with "Eagle Fly Free", the kind of song that changes people's lives — perhaps the ultimate, archetypical double-kick-driven power metal speed anthem (the phrase “often imitated, never duplicated" comes to mind). "You Always Walk Alone" may be one of the band's more MAIDEN-esque moments (MAIDEN as filtered through the first QUEENSRŸCHE EP, perhaps) but it's still a rousing tune, with an especially gymnastic performance from singer Michael Kiske.

The comedy portion of the album then begins, with the Weikath-penned "Rise and Fall" (complete with awful sound effects) and "Dr. Stein", a delightful (if corny) hit single for the band. HELLOWEEN (and Weikath in particular) have taken their share of shit over the years for the band's goofy sense of humor, but these tracks leaven the soaring, fast-paced numbers and the album-side-length epics. It's just another element in the pumpkin stew, and one many fans find essential.

The moody "We Got the Right" is the perfect antidote to the sugary camp of the previous two songs, a bombastic and proud trad-metal classic with an awe-inspiring performance from Kiske. "Time Marches On" is another fast one, still fresh after twenty years, much more so than the legions of pretenders influenced by this particular style who ripped off HELLOWEEN without understanding the band's dynamics.

"I Want Out", of course, needs little introduction — the band's biggest hit (albeit one Weikath isn't crazy about),it's one of the all-time best metal singles, with a guitar hook and a chorus that both imbed themselves into your head for life upon one listen. It could be considered a throwaway, but it's no more so than "Dr. Stein" or "Rise and Fall" — all three are great examples of the band in a more rockin', playful mode, and all three are awesome songs, end of story.

That brings us to the title track, Weikath's epic answer to guitarist Kai Hansen's "Halloween" from the previous installment. It's easy to run out of adjectives for "kickass" when talking about this album, but a few have to be spared for this song — at over thirteen minutes, it's got more parts than some bands muster up in an entire career, running an orchestral and emotional gamut from PINK FLOYD trippiness to balls-out heavy metal to lush, operatic choruses. There's little that's come since that can compare to this mad metal theatre, and it's a defining moment in rock music, nothing less.

Nothing slotted after "Keeper" can really compare to it, but "Save Us" has a spine-tingling chorus and is another fine example of HELLOWEEN at their fastest and most uplifting. After that, the bonus tracks (including two remixes and two b-sides) are nice to have, but hard to take as seriously as the breathtaking album that you've just experienced (though "Livin' Ain't No Crime" sports nice THIN LIZZY-esque guitar and a big, fist-waving soccer anthem feel). Once again, though, it's awesome to have this album in remastered form, in a nice package with real liner notes, instead of some bogus BMG "nice price" CD.

There can be no argument about the impact the two "Keeper" albums had on heavy metal. Adding pomp, circumstance, their uniquely German humor, virtuoso playing and a wicked sense of dynamics to their aforementioned influences, they brought power metal into its own, and created a legacy that's not only carried the band through two turbulent decades, but launched the impressive GAMMA RAY (Hansen's band after he split from HELLOWEEN) as well. I said it before — in twenty years of trying by hundreds of faithful devotees and flat-out copycats alike, no one has come close to topping the "Keeper" albums, and it's doubtful anyone will. You need this album, and if you already own it, you need to get it again.