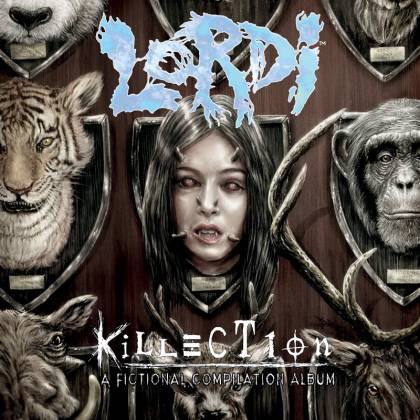 For those metalheads who like a bit of fun with their fury, LORDI albums have always been a guaranteed good time. There's nothing complicated going on here: this is big, brash and balls-out entertainment, with songs full of sex-crazed monsters and vampires with machine guns. An unremittingly goofy distraction from life's stresses, LORDI's music is heavy on hooks and hooked on heaviness. As if to prove the point, last year's "Recordead Live – Sextourcism In Z7" live album was an absolute joy from start to finish. It was also a reminder that the Finns have a huge number of genuinely great songs.

As it turns out, it was also a wholesale roundup of LORDI's story so far, seemingly to clear the decks for "Killection", which is easily the most ridiculous album of the band's career so far. Ostensibly a compilation album with songs darting from style to style and hard rock subgenre to hard rock subgenre, it's a necessarily diverse affair; heavy on the cartoon horror shtick, but also much more firmly rooted in traditional heavy metal than previous efforts. In truth, the difference between the radio-friendly likes of "Horror For Hire" (think BON JOVI or '80s KISS) and "Shake The Baby Silent" (ROB ZOMBIE wants his song back!) is all in the production: in essence, this is another batch of insanely catchy LORDI shout-alongs, but with a freewheeling ethos dictating the way each tune is presented. Thus, "Like A Bee To The Honey" is a gleaming AOR gem; "Apollyon" is all MEAT LOAF pomp and ALICE COOPER shlock; "Blow My Fuse" is a shuffling chunk of gonzoid BLUE CHEER worship; "Zombimbo" is a strutting disco number, like "Dynasty"-era KISS gone horribly right; "Evil" owes a dastardly debt to SLAYER and CRADLE OF FILTH. And on it goes, with moderately amusing radio-style skits and a general sense of anarchic abandon that suits LORDI to the glittery ground.

As much as this is as knowingly daft as everything else the band have done, it hangs together so well because this band have an incredibly strong identity and the audacity to be considerably more ludicrous than the rest. It's a dirty job, but LORDI do it well.