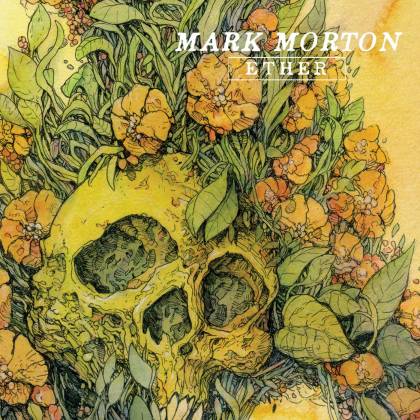 Mark Morton stepped out from behind his post as LAMB OF GOD's guitarist last year with his debut solo record, "Anesthetic". There were not any songs that could be considered groundbreaking, but the record showcased Morton's chameleon-like ability to adapt his songwriting to the capabilities and talents of diverse vocal performers like Chester Bennington (LINKIN PARK, STONE TEMPLE PILOTS) and Chuck Billy (TESTAMENT). Morton's follow-up EP, "Ether", once again sees the guitarist working with multiple vocalists, this time in a semi-acoustic capacity. Those of you seeing the "A" word in the previous sentence and fearing another record in the recent trend of metal musicians generating meandering folk music can rest easy, as the three originals and two covers on display here are grounded in the semi-acoustic rock realm.

The brightest light on "Ether" emanates from a cover of the 1990 BLACK CROWES Southern rock ballad "She Talks to Angels". The song transcends its status as a cover, thanks to the infectious combination of the extra-Southern twang Morton gives to his guitar performance and a soaringly beautiful vocal performance from Lzzy Hale (HALESTORM). Both of those performances are coated in the shiny gloss indicative of modern country rock radio, and the inherent soulfulness of the original song and Hale's vocal output lend an emotionally powerful aura to make this a memorable rendition. The HALESTORM vocalist turns in what may be the finest performance of her career, her throaty rasp carrying deep emotion behind the verses and hitting registers evocative of AEROSMITH's Steven Tyler as the track crescendos. If the track becomes a huge radio hit down the road, it would not be a surprise.

Another standout vocal performance comes from Howard Jones (LIGHT THE TORCH, KILLSWITCH ENGAGE) on Morton's original composition "Love My Enemy". Jones layers a soothing high-note croon over Morton's acoustic guitar work on the song's softer touches. When the song hits its electric-guitar laden rock chorus, Jones soars with the melodic howls that have been one of his trademarks throughout his career. The song also features "Ether"'s most purely metal moment as Morton emits a short shock of shredding guitar solo. The structure of the song suggests an alternate universe where the 2002 "Spider-Man" movie came along a couple of years later as LAMB OF GOD and KILLSWITCH ENGAGE were hitting their commercial peaks, and this would have been the big single from the motion picture soundtrack instead of the Chad Kroeger/Josey Scott collaboration "Hero".

Other vocal performances on the EP yield mixed results. MOON TOOTH's John Carbone's vocals at the beginning of the drum machine-powered original track "The Fight" are filtered through a disembodied atonal vocal effect throughout the verses. Thankfully as the chorus kicks in, the ghost-like fog lifts from Carbone's vocals, allowing him to rise with emotion in a manner similar to Lajon Witherspoon (SEVENDUST) on his memorable performance of "Angel's Son". Mark Morales (SONS OF TEXAS) is the only vocalist with two appearances here. Unfortunately, lead track "All I Had To Lose" is the weakest track on the record. Morales gives a performance over a solitary acoustic guitar — accompanied by faux-orchestral arrangements — that revives repressed memories of the sensitive-bro nadir of turn-of-the-century acts such as STAIND, though Morales does fare better on Morton's stripped-down arrangement of PEARL JAM's "Black".

Even if everything doesn't hit as intended, you can still give Morton credit for crafting "Ether"'s arrangements to mostly showcase the strengths of his collaborative partners. The weakest points of the record are still worth plowing through if only to indulge in the sublime beauty of his and Hale's cover of "She Talks To Angels".