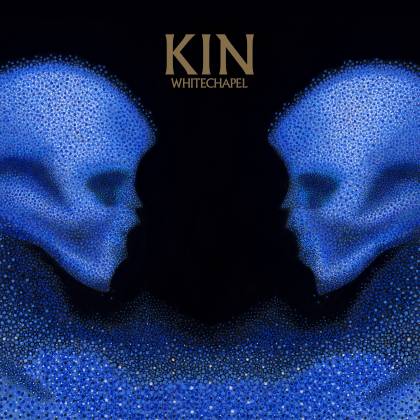 There was a time, not so long ago, when deathcore was routinely decried as a one-dimensional clown show for emotionally stunted, suburbanite timewasters. Harsh dissenting voices may have had a point in terms of the genre's low-hanging fruit, but WHITECHAPEL have done more than arguably any other band to prove the doubters wrong, particularly so in recent times. Always one of deathcore's most creative bands, Phil Bozeman's crew have evolved steadily but with dogged commitment to the cause, and nearly two decades of hard work came to startling fruition on 2019's "The Valley". Widely and rightly acclaimed, WHITECHAPEL's seventh album retained the band's trademark avalanche of seven / eight-string riffs and venomous guttural vocals, but added a slew of new elements, sustained bursts of melody, far greater atmospheric depth than on any previous album and several of the finest songs the band have ever written. Not surprisingly, then, "Kin" arrives with great expectations looming overhead, and for the most part it lives up to its predecessor's high standards and subtly oddball take on metal modernity.

Brooding but breezy acoustic guitars usher in opener "I Will Find You": a strong statement in itself, albeit one swiftly usurped by a brutish groove and the arrival of Bozeman's leathery larynx. Thereafter, "Kin" is a blur of shocks, surprises and, just to calm the nerves of those fearing that WHITECHAPEL have jumped the shark, deathcore boxes ticked. "Lost Boy" and "A Bloodsoaked Symphony" are both prime examples of how this band continue to mutate and mature. The riffing and spine-loosening double-kicks that this music demands are present and correct throughout, and WHITECHAPEL have seldom had so much sonic clarity to back up their triple-guitar attack, but these are songs that spurn traditional structure in favor of an elegantly expressed shape-shifting approach. Instead of hammering away with the usual dynamic tricks, songs like "The Ones That Made Us" and "To the Wolves" simply offer broader textural range and, primarily via Bozeman's lyrics and always killer vocals, an intelligence and imaginative flair that may yet enable WHITECHAPEL to hasten their upward ascent. Aside from any other concerns, this band still slam admirably hard.

Elsewhere, "Kin" is an album that tries a little too hard to highlight its own open-mindedness, particularly in terms of embracing melody. "The Valley" had a few highly effective moments with clean vocals as a focal point; most of the comparable moments on "Kin" repeat the trick with great success, and with endearing echoes of KATATONIA adding to the hazily progressive atmosphere. In particular, "History Is Silent" is a superb piece of songwriting and a neat encapsulation of WHITECHAPEL's ongoing evolution. Unfortunately, after the marauding clatter of "To the Wolves", things take a turn toward the prosaic, and "Kin" settles into a mid-paced, alternative rock groove, with both "Orphan" and the closing title track edging into overwrought, post-grunge balladry territory. The intermittent, bowel-rattling violence of "Without Us" saves the album's final stretch, but the expected triumphant climax to this otherwise excellent record never quite materializes.