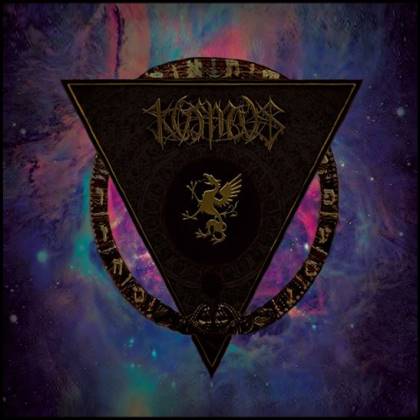 Not to be confused with the KOSMOS side project of VOIVOD's Michel "Away" Langevin, this French black metal project is decidedly more sinister in sound, despite its inherent theme of mankind's desperate and pointless conflict in trying to master Nature. Not exactly your standard black metal fare, this sense of conscience to KOSMOS' second offering, "Le Vecteur Transcendantal" unveils refinement beyond its primarily harsh palettes that carries into its grueling presentation.

The variations spread throughout the compositions of "Le Vecteur Transcendantal" are remarkable despite the frequently rough nature of mastermind Nekros' work. The near seven minutes of "Vengeance Contre L'infame" reveal some of Nekros' most impressive playing on the album, aside from his burning solo on "Quand L'innocence Saigne…" He lays down effective guitar transitions and haunted melodies that match the constant mood swings of the track. Sorrow begets increasing agitation begets full-on outrage, but Nekros' note scrounging ends up working to the song's benefit. The 8:06 "L'ombre De Ton Geniteur N'existe Plus" takes numerous courses that unravel different tones ranging from hostile to reserved. "Vos Carcasses Vides Nourrissent La Terre" teeters toward the edge of insanity right off the bat with fantastic shredding and subsequent guitar wails, even if Nekros' strumming is so demanding here you can detect slight fatigue in waning portions of his flow.

Nekros' shivery vocal hissing throughout the album is terrifying, but that's no oddity for black metal. Considering he has a ton of coarse riffs to match his liquidy throat scrapes and gyrating bass lines, it's significant he sews together as much as he does. The drumming from Naja Atra (also responsible for the mixing and mastering of the album) repeatedly bops between steady, ugly clubs and thundering double hammers during the main eddies of the songs. On a slower song like "Enfonce Tes Clous Dans Nos Limbes Noircies", however, Atra's chops are on better display with plenty of explosive rolls at mid-tempo to give Nekros' attractive guitar scales an added sense of grace. Bringing up the banging bass lines during the instrumental portion of the song shows terrific musicianship, even as the final bars grow a hair messy in the guitar parts that seek escalation into the fadeout.

"Le Vecteur Transcendantal" is turbulent and sometimes choppy, but it's far more polished than many privateering black metal acts. What Nekros exposes on his second effort is a developing aptitude for chord progressions, instinctive signature roving and snappy bass slogs. As fearsome as the tones are throughout this album, Nekros has enough constitution to employ a peaceful guitar intro as counter to the brutal and forlorn "Violation Du Passe". The rocked out opening to the spooky closer, "Post-Humain Ou Quand Les Etoiles Brulerent A Notre Chute" helps the song cross over just a hair into slightly less caustic forms of metal. For only two guys at-work, it's a massive track. Thus the rough edges and minor shortcomings of "Le Vecteur Transcendantal" are easily forgivable, since Nekros is obviously passionate about his craft. The average listener is advised to back off, but black metal savants are going to want to give this incarnation of KOSMOS their full attention.