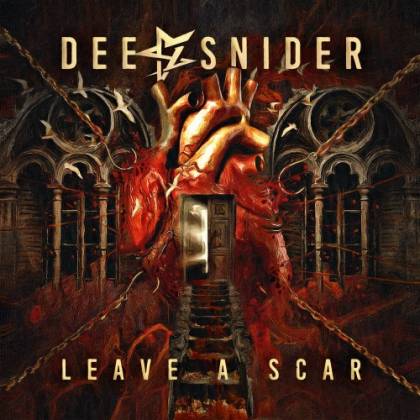 Three undeniably brutal years on from his magnificent comeback record "For The Love Of Metal", we need Dee Snider more than ever. In fact, it still feels as though an insufficient amount of fuss has been made about the return of the legendary TWISTED SISTER frontman, not to mention Jamey Jasta's admirable and integral part in lighting a fire under his seemingly ageless backside. Not just one of the greatest heavy metal voices ever, but an invigorating force of nature who continues to talk a great deal more sense than most ageing rock stars, Dee should definitely have been making records like "Leave A Scar" two decades ago. Thankfully, he now sounds fully in the groove, reveling in every moment and genuinely thrilled to be doing what he does best. After all, when it comes to making up for lost time, no one is better equipped than the irrepressible New Yorker.

You will doubtless have heard the singles: the fiery but knowing "I Gotta Rock (Again)" and the utterly brilliant "Time To Choose", wherein CANNIBAL CORPSE's George "Corpsegrinder" Fisher lends his coruscating bark to a high-energy assault on destructive fence-sitting. But while many bands release their catchiest material in advance of the big album drop, "Leave A Scar" is simply relentless, delivering giant chorus after giant chorus, and massive riff after massive riff. Even more so than on "For The Love Of Metal", Dee sounds like a man thriving at the heart of a real, red-blooded metal band here. The line-up of Nick and Charlie Bellmore (on drums and guitars respectively),guitarist Nick Petrino and bassist Russell Pzütto have audibly struck upon sublime chemistry, and there is a real joy in the sound of Dee kicking off over such a vibrant and gritty backdrop.

There are no weak spots or drops in quality here, but certain songs leap out as future live classics, for when this band hit the road in earnest again. "All Or Nothing More" is a glorious example of how traditional metal songwriting can be beefed up with elements from a post-millennial metal world. Likewise, "Open Season" is a strident, melodic affair, with plenty of '80s metal DNA flowing through its cell structure, but the delivery is muscular and proudly rooted in the last 20 years of American metal. It's a simple formula, but it's perfect for Dee Snider, just as Jamey Jasta foresaw when this whole thing began. Whether it's the heads-down savagery of "The Reckoning" or the deeper, darker likes of "Silent Battles" and "Before I Go", "Leave A Scar" is exactly as heavy, life-affirming and in-your-face as we should probably now expect from New York's most unstoppable son. Terrifyingly, he sounds like he's just getting warmed up.