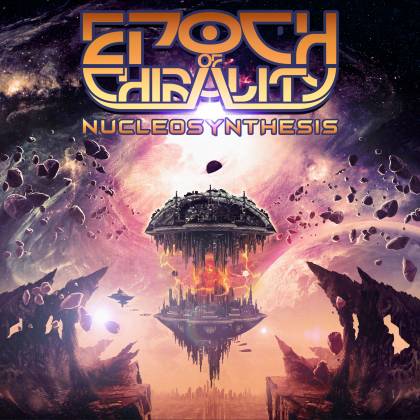 According to Wikipedia, "a molecule or ion is called chiral if it cannot be superposed on its mirror image by any combination of rotations, translations, and some conformational changes. This geometric property is called chirality." So that's cleared that up.

These are strange times, and strange times call for strange metal records. You don't have to be able to understand the concept of chirality to appreciate that EPOCH OF CHIRALITY have appeared from nowhere, seemingly fully fledged and armed with one of the most wildly enjoyable, sci-fi themed albums in recent memory. An all-encompassing instrumental prog metal odyssey through twinkling storms of cosmic debris and unfathomable black voids, "Nucleosynthesis" is pure escapism, and all the more welcome as a result.

The work of one supremely talented individual, "Nucleosynthesis" is a virtuoso tech metal record to its platinum roots, and yet it also evokes the same sense of old-school futurism that has made synthwave such an integral part of this decade's sonic backdrop. Even as giant, muscular riffs erupt from all directions, the pulsing electronics at the beginning of "Undercity Rising" are present throughout the song, underpinning its ominous, pomp-laden progginess with the skittering clatter of marching robots. That cheerful disregard for conformity permeates the entire album.

Instrumental metal can often be guilty of existing purely to make other musicians happy, but "Nucleosynthesis" sidesteps that obvious trap through sheer depth of imagination. "Caravan to the Midnight Mountain" is an explosive symphony from some distant sun-blistered planet, but rich with elegant, mystical Middle Eastern grandeur and pointedly, proudly cinematic. "Boreal" is even more astonishing: its seven supremely visual minutes switching effortlessly from John Carpenter-esque menace to majestic, melo-death bombast, before veering off on a woozy prog tangent, with spiraling synths in abundance.

Significantly, while all this multi-genre insanity is taking place, EPOCH OF CHIRALITY serve up a relentless stream of sharp hooks and lush melodies, with everything wholly assimilated into the album's overall flow. From the cyber-delic avalanche of "Pyramid Cybergod" to the thuggish disco-metal throb of rousing closer "Paradox", every song bursts with smart ideas and a tangible willingness to see the best of those ideas through to their most satisfying conclusion. Most importantly, if you dig heavy metal and sci-fi, this is basically what goes on in your head when you're sleeping anyway, I would imagine. "Nucleosynthesis" may not be the exact sound of the future, but it's as riotous, colorful and effortlessly cool as we once hoped the future would turn out to be. Fuck's sake.