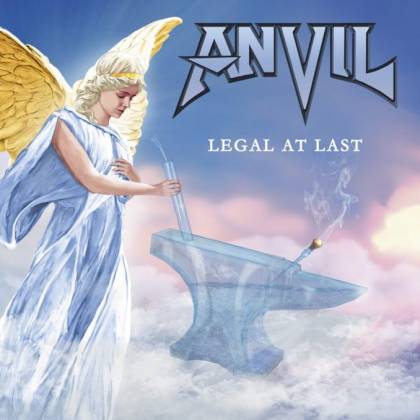 Twelve years on from "Anvil! The Story of Anvil", it's hard not feel a shiver of satisfaction that Lipps Kudlow and Robb Reiner are living the life they always wanted: releasing albums on a regular basis and spending the rest of their time touring like madmen. It's worth noting that "Legal at Last" would probably not exist had the Canadians not made the most of their moment in the celluloid spotlight. But here it is, their fifth full-length since the movie, and quite feasibly the most entertaining of the lot. No one is expecting ANVIL to release another "Forged in Fire" at this point — their brief time as pioneers is well documented, but almost secondary to their status as stoic underdogs, impervious to time or fashion. Instead, "Legal at Last" is more of the same thunderous and endearingly goofy old-school metal, hewn from the exact same ingredients that the band have used all along.

The opening title track is a textbook speed metal ripper, not unreasonably celebrating the legalization of weed in Canada. Likewise, "Nabbed in Nebraska" tells a cautionary tale of confiscated contraband south of the border, over a slamming hard rock core. "Chemtrails" is another heads-down, double-kick clatter-fest, with some sweet THIN LIZZY harmonies and plenty of knuckleheaded fury. And on it goes, through various exuberant iterations of that undeniably basic but irresistible ANVIL formula: "Gasoline" is a lumbering doom horror show; "Talking to the Wall" is gnarly, menacing throwback to "Winged Assassins"; "Plastic in Paradise" takes an unlikely dive into ecological angst, over a treacly torrent of angular SABBATH-isms.

None of it, it hardly needs saying, is designed to confound or challenge, and you could feasibly accuse ANVIL of not trying particularly hard, were it not for the self-evident fact that they play every note as if their lives depended on it. The shit-eating grins and air of sweaty triumph are practically audible throughout. And yes, ANVIL have already hit the road again with a vengeance and will probably stay there until it's time to make another hugely entertaining heavy metal record. It's what they always wanted, after all.