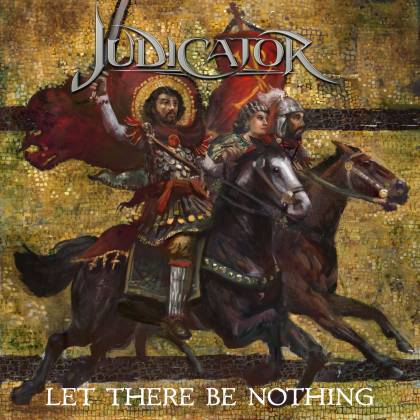 Let There Be Nothing

There was a time, not so long ago, when the U.S. trad and power metal scenes seemed terminally unable to compete with their European counterparts. Or at least that's what we tell ourselves shortly before the shaming revelation that JUDICATOR are poised to release their fifth studio album. Doubtless there are plenty of diehards in America and elsewhere who knew all about this band long ago. It's probably just me. I'm hanging my head in shame as I write this. The good news, of course, is that "Let There Be Nothing" is an absolutely staggering feat of epic power metal extravagance. If the band's previous records are even half as good as this, my shame will be complete, but my music collection will be enhanced. You take the rough with the smooth in this game.

Pleasingly, this outright celebration of metal's bombastic instincts could be the ultimate mood enhancer. JUDICATOR owe a considerable debt to the spirit and approach of European power metal, but they are also songwriters of undeniable brilliance, with a huge amount of imagination and guile hurled into every opulent mini-symphony. Oh, and the vocal harmonies are absolutely magnificent, with a BLIND GUARDIAN-like richness and dramatic depth, not to mention occasional meanders into pastoral prog territory. Vocalist John Yelland deserves particular credit for selling every mythological or conceptual conceit with the conviction they deserve.

The songs themselves are all immaculately constructed and almost overburdened with hooks and melodic tricks, but where many power metal bands would keep it simple, JUDICATOR power forward with the brakes off, exuding a sense of otherworldly power and arcane heavy metal mastery that has more in common with ATLANTEAN KODEX or prime MANILLA ROAD than with any of European metal's shiniest big hitters. Songs like "Let There Be Nothing" and "Strange to the World" take a circuitous route to delivering the goods, and the journey is never less than fascinating and so joyously, unashamedly metal that, once again, I feel really stupid about missing the first four albums. I'm on it, don't worry.

Meanwhile, JUDICATOR can do succinct and gritty too — both "Tomorrow's Sun" and "Gloria" have an anthemic core and a hint of grim brutality — but it's the ornate sprawl of "Amber Dusk" that provides "Let There Be Nothing" with its glittering zenith. Nine minutes of shapeshifting old-school valor, it's like early MANOWAR fed through a thrash metal kaleidoscope, with perhaps a light sprinkling of early QUEENSRŸCHE or PSYCHOTIC WALTZ thrown in for good measure. And with a production that strikes an exquisite balance between contemporary bite and traditional tones, JUDICATOR's latest and (I'm guessing) greatest album yet could well delight a diverse cross section of metal fans. Frankly, if "Let There Be Nothing" doesn't make you feel all fired up and heroic and shit: well, you may have walked in through the wrong door. We all make mistakes.