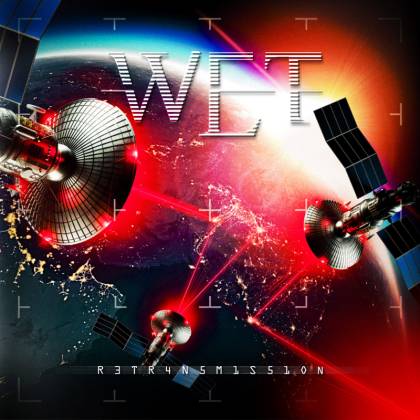 The year 2020 won't be remembered fondly for a myriad of reasons, but for fans of melodic hard rock, the year was especially devastating. The reason? It was a 12-month drought that featured no new original music by Erik Martensson, the Swedish singer / guitarist / producer who's arguably the genre's most prolific, and most gifted, songwriter. That's not to say Martensson took the year off — his primary band, ECLIPSE, issued its first official live album and also released a cover of a song by fellow Swede Lisa Miskovsky — but after a remarkable multi-year stretch that saw him churn out top-shelf new material like clockwork with ECLIPSE and side projects such as NORDIC UNION and AMMUNITION, it was surprising that he seemed to go comparatively dark in 2020.

Or so we thought. In November, Frontiers announced that W.E.T. — Martensson's celebrated project with vocalist Jeff Scott Soto (SONS OF APOLLO, TRANS-SIBERIAN ORCHESTRA) and guitarist / keyboardist Robert Såll (WORK OF ART) — would release their fourth album, "Retransmission", in January. Accordingly, while 2021 might still be young, it already has a leading contender for melodic rock album of the year.

While W.E.T.'s first two records both had hooks for miles, it was 2018's powerhouse "Earthrage" that best captured the group's masterful blend of giant melodies, taut songwriting and instantly memorable choruses. Notably, "Earthrage" also added a sprinkle of muscle that the group had only previously demonstrated on their excellent 2014 live release "One Live — In Stockholm".

"Retransmission" might not seem as punchy as "Earthrage" upon initial listens, perhaps as a result of Martensson's stated intent to make a "more positive" album this time around. Behind its rich melodic veneer, however, there are occasional unexpected, and exhilarating, bursts of sudden ferocity: "Beautiful Game", for example, is arguably the most aggressive song W.E.T. has recorded yet. Powered by a Sunset Strip-worthy riff, the track seems like WHITESNAKE and VAN HAGAR's love child when both acts were at their heaviest, with a dazzling, tapping-accented solo serving as the proverbial cherry on top. It's a style that's instantly familiar to fans of '80s rock, yet it's so far removed from the faceless, "yarling" dreck passing for hard rock nowadays that it sounds completely fresh.

Other songs have a similar throwback feel — "Got To Be About Love" wouldn't be out of place on John Cusack's boombox; "Coming Home" is the best arena rock anthem that Bryan Adams never wrote; and the chorus of "What Are You Waiting For" sounds like a lost REO SPEEDWAGON B-side — but they're presented in such an authentic and irresistibly melodic manner here that resistance is futile.

Elsewhere, EUROPE's influence — another act for whom Martensson makes no secret of his affection — is heard loud and clear on "Call Of The Wild", a bouncy track which finds Soto singing his JSS off. While the vocalist's profile has grown considerably in recent years via SONS OF APOLLO, W.E.T. 's material is a better fit for his range and style. Here he delivers an inspired performance that shows no signs of comfort zone complacency.

Still — and not to belittle the contributions of Såll or guitarist Magnus Henriksson, whose flashy yet tasteful fretwork impresses throughout — Martensson's songwriting and production prowess are what turn a good album great. He also knows a thing or two about sequencing, as some of W.E.T.'s, and ECLIPSE's, for that matter, best songs serve as album closers. That trend continues on "Retransmission" with the dramatic and theatrical "One Final Kiss", which delivers an out-of-nowhere knockout chorus on top of a major key change that essentially serves as a dare to resist the temptation to let the record play through all over again. (Speaking from experience, that's easier said than done.)

It might seem blasphemous to compare a new release to BOSTON's legendary debut or the classic records produced by Mutt Lange, but sonically, "Retransmission" is cut from the same rarified cloth. Simply put, the album sounds like a million bucks from front to back, and even though there's clearly a "don't bore us, get to the chorus" formula at work here, the craftsmanship on display is undeniable. Unfortunately, Martensson was born three decades too late to get the credit he truly deserves, and unless he has another trick up his 2021 sleeve, fans of melodic hard rock won't have a more transcendent listening experience this year.