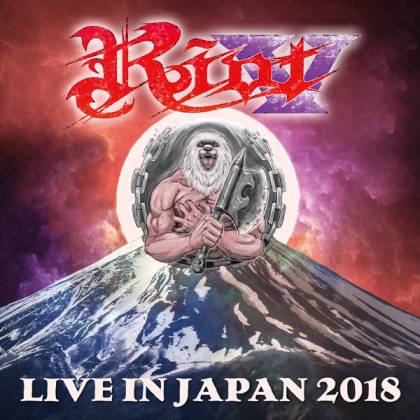 If ever there was a band that deserved much more recognition and praise for their contribution to heavy metal, it's RIOT. Originally formed by the late, great Mark Reale in 1975, the New Yorkers were an omnipresent force for hard rocking excellence for the best part of 40 years, before their leader's untimely passing in 2012. Outside of the US, RIOT have remained more of a cult concern, but their rebirth as RIOT V has been an unqualified success. Both 2014's "Unleash the Fire" and its 2018 follow-up "Armor of Light" were justifiably well-received; Reale's original template for blazing, traditional metal plainly in safe hands with longtime co-guitarist Mike Flyntz and bassist Don Van Stavern still on board. Vocalist Todd Michael Hall has been a huge asset, too, and it's his commanding presence and unfussy charisma that provide the glue that holds "Live In Japan 2018" together. Both a celebration of RIOT's formidable catalogue and a blustery reassertion of musical values under the RIOT V banner, this has a real milestone feel about it, even before you peruse the frankly mind-boggling track listing.

In sonic terms, "Live In Japan 2018" sounds as thunderous, precise and vibrant as you could wish from a modern live metal record. Part of the brilliance of RIOT's evolution over the years was in the way changes in songwriting style and new trends in production never seemed to undermine the band's core sound and unerring dedication to balls-out heavy metal. Here, the fact that 30 years separates the composition of classic anthem "Swords and Tequila" and latter-day ballad "Wings Are for Angels" (originally from 2011's "Immortal Soul", Reale's final RIOT album) is rendered meaningless, because RIOT V play it all with the same electrified vigor, simultaneously contemporary and old school, each with equal conviction.

At 110 minutes in length, this is plainly not aimed at casual fans, but as a one-stop shop for all your RIOT needs, "Live In Japan 2018" is pretty much unbeatable, not least due to a complete performance of 1988's classic "Thundersteel" album. From the absurdly thrilling speed metal fury of the title track to the dark emotional crescendo of "Buried Alive (Tell Tale Heart)", "Thundersteel" is one of the '80s great American metal albums; a timeless masterpiece that RIOT V play like men possessed, propelled breathlessly forward by Todd Michael Hall's note-perfect performance. As an ageing metalhead who still owns a slightly battered copy of "Thundersteel" on vinyl, it's impossible not to grin during the likes of "Sign of the Crimson Storm" and the Japanese crowd clearly loved every second of it, too. Quite rightly, "Flight of the Warrior" turns into a rowdy singalong. This is ageless, virtuoso stuff.

Genuinely great live albums are few and far between these days, but "Live In Japan 2018" makes the grade on every level. For older fans, it's a timely reminder that the greatest metal never gets old. For everyone else, it's a stirring and substantial introduction to one of the greatest American heavy metal bands of all-time. Somehow, perhaps against the odds considering the age of those involved, it's genuinely exciting. To borrow a phrase from final encore "Warrior", long may RIOT V "ride on with strength and will." It sounds like they're having a blast doing just that. Mark Reale would be proud.