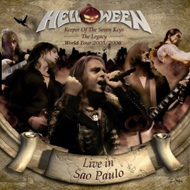 Or, if you prefer the full pedigree, "Keeper of the Seven Keys: The Legacy World Tour 2005/2006 Live In Sao Paulo" — a title as large and awkward as the horsepill of a live album it adorns. Is there a nice way to say something is a "horsepill?" Because while this sucker is huge and might require a strength-restoring nap between CDs, there's no denying it delivers the goods for the world's diehard HELLOWEEN fans.

And Americans — yes, you who wonder how this band is still cranking out 100-minute epics like 2005's third "Keeper" installment — just listen to that Brazilian crowd on the 13-minute opener "King For a 1000 Years". That's a new song, on the new album, and the crowd is lustily bellowing every word with as much enthusiasm as they show for "Future World" and "I Want Out". (If you listen carefully in headphones, you can hear one fan yell "The Dark Ride!!!" shortly before being taken out back and shot by a death squad. I kid, I kid — the band even throws fans of that era a bone with a gritty, heavy rendition of "Mr. Torture" and an inspired "If I Could Fly".)

This one is absolutely, defiantly, and quite happily for the diehards — few bands would have the balls to open with an epic like "King For a 1000 Years", perform the huge original "Keeper of the Seven Keys" in its entirety, and then throw on "Occasion Avenue" (10:18) and "Halloween" (13:39) as bonus tracks. But HELLOWEEN is a band quite comfortable in their skin these days, happy with their status as elder statesmen of epic power metal and creators of modern-day classic album sides dripping with guitar prowess, high vocals, and seemingly endless opportunities for Third World arenas to sing along at high volume.

Soundwise, of course, this thing sounds pretty much perfect — whether it's tweaked in the studio or just the result of five really, really good musicians playing through top-notch shit can be a subject for message board debates. It's hard to argue with the results either way, though, when ten minutes into "Keeper", vocalist Andi Deris starts doing the soccer sing-along thing in tune to the blistering twin lead guitar, and what sounds like the entire nation of Brazil chimes in. Loud, punchy, constantly adjusting the crowd noise so it never gets irritating or overpowering, the mix here makes this a worthy live document.

I'll say it again — it's for the diehards. If the track listing and sheer metric tonnage of heavy metal included didn't tip you off, the multiple versions being releases on different continents might be another clue. Get every version, and the double DVD while you're at it, and go for total HELLOWEEN immersion — or don't, because the band is clearly loving where they are in the metal pantheon today and aren't about to change for anyone. It's a testament to their talent and dedication that "Live In Sao Paulo" is as good as it is — having earned a fan base that would happily buy just about anything with an evil pumpkin emblazoned on it, the band still care enough to infuse their work with nothing but quality and the enthusiasm of a band one-tenth their age.