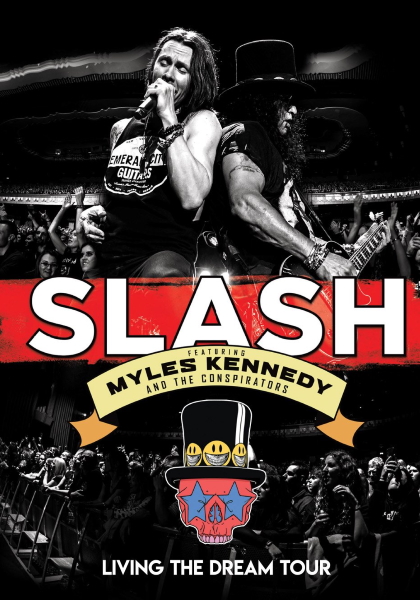 Slash is a household name to the same extent as GUNS N' ROSES is. Simply put, the man who is inextricably linked with the image of his black top hat and face-concealing long, curly hair is one of the greatest figures in the history of rock 'n' roll. The living legend is back in the spotlight with "Living The Dream Tour", a DVD/CD combo that was culled from his band's early 2019 London performance. The show that's captured is a two-hour set of tracks from all four of Slash's solo albums, entailing go-to numbers like "Call Of The Wild", "Back From Cali", "World On Fire" and "Anastasia". What matters most is that the release is captivating because it truly pulls listeners in, to the point that one almost feels like they're attending the show because the recording encompasses all of the details, warts and all.

As much as the iconic guitarist proves himself with a reliably impressive performance, vocalist Myles Kennedy proves his worth with his dramatic take on classic and timeless rock. The rest of THE CONSPIRATORS — including drummer Brent Fitz, bassist/vocalist Todd Kerns, and guitarist/vocalist Frank Sidoris — offer stellar contributions, but there's no doubt that they essentially serve as the foundation upon which Slash and Kennedy have the opportunity to shine. And the duo most certainly capitalizes on what is clearly Slash's most succinct solo offering yet; one that eschews the admirably adventurous yet meandering expressions that were abundant on his earlier solo material.

"Living The Dream Tour", the first release since Slash actually rejoined GUNS N' ROSES, is chock-full of his signature, sensual, hard-hitting groove and one-of-a-kind solos that hang for days upon extended notes. It's enjoyable, and, at times, desirably reminiscent of GUNS N' ROSES' debut — most notably on the grimy track "Boulevard Of Broken Hearts" — yet it is simply too safe. The Slash that we know and love is supposed to be unhinged and chaotic. Perhaps that's an unfair desire from the fanbase's vantage point, but then again it makes sense considering the core nature and value of the artist that was clearly established decades ago.

For longtime GUNS N' ROSES diehards, "Living The Dream Tour" will be an overdue quenching of the thirst for that band's classic, early work. The style and sound has been repurposed through modern aesthetics, as with the contemporary yet timeless "Slow Grind" and "Serve You Right", predominantly attributable to Slash's more mature station in life. So, invariably, there is less excitement compared to what Slash initially offered in GUNS N' ROSES' early days. But even then, "Living The Dream Tour" is a tasteful hard rock effort that's clearly head and shoulders above the competition.