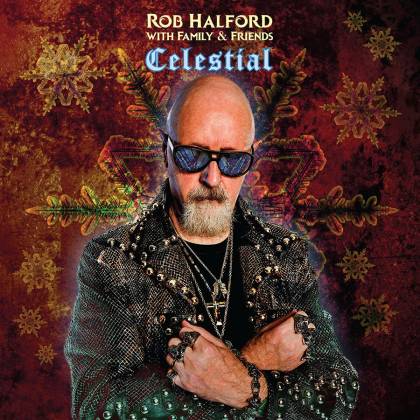 Rob Halford isn't simply a metal god. The man, the myth, the legend is the metal god. Our fearless leader returns with his own spin on the holiday season on his second Christmas album, "Celestial". ("Halford III: Winter Songs" was released in 2009.) In some all-too-stern-and-serious circles, it may be considered "blasphemous," in a metal sense, that he isn't choosing to celebrate Halloween with song, but everything that one would likely expect from a Rob Halford Christmas album is exactly what he delivers.

The iconic JUDAS PRIEST frontman assembled a lineup of family and friends for the release. Halford's brother Nigel plays drums, while his nephew Alex — who is the son of JUDAS PRIEST's Ian Hill — rounds out the rhythm section on bass. Additionally, Robert Jones and Jon Blakely play guitars. And finally, Halford's sister "plays the bells." If it wasn't obvious enough already, "Celestial" is intended to be a very fun album. Some of the online purchase packages, in fact, include complementary merch items like Christmas sweaters, puzzles and prayer candles.

Halford and company pour classics like "Joy To The World", "Deck The Halls", "The First Noel" and "Away In A Manger" through a heavy metal filter while maintaining the spirit of the holiday classics. Halford's collective simultaneously presents these songs in a way that will be appealing to a plethora of metalheads. "Celestial" also includes four original songs: the title track, the blistering, full-tilt "Donner and Blitzen", "Protected By The Light" and "Morning Star".

The release is Halford's first solo album since 2010's "Halford IV: Made of Metal". Since that time, he has released a pair of JUDAS PRIEST albums: 2014's "Redeemer of Souls" and 2018's "Firepower" — veritable bangers, to be sure. Halford is slated to rejoin his bandmates in JUDAS PRIEST in early 2020 for a Euro tour with OZZY OSBOURNE. Rather than kicking back on a couch prior to that storm, Halford reliably remained productive by releasing this album. And yet it is clearly a breather from his "day job."

There is an undeniable sense of self-awareness throughout "Celestial" as he performs family-friendly classics with heavy metal's fist-to-the-face approach, which highlights his banshee-like wailing, crooning, screeching and growling. The irony is not lost on our favorite hell-raiser at all. If it weren't for his mesmerizing abilities and over-abundant, genuine passion, his metallic take on the likes of "Hark! The Herald Angels Sing" would have succumbed to the presumable pitfall of parody. At the end of the day, "Celestial" will not be remembered in the way that an extensive portion of his body of work will be. It's simply a fun and enjoyable album that isn't intended to be taken too seriously.