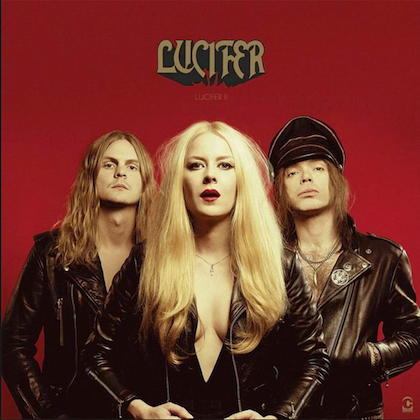 One of the great losses of future potential in the metal world occurred when German/Swedish occult-doomsters THE OATH broke up in 2014. The group's self-titled debut that year showcased the melodic vocal croons of Johanna Sadonis, who showed promise as a rising metal vocalist to keep an eye on. After of THE OATH's breakup, Sadonis regrouped alongside iconic CATHEDRAL guitarist Gaz Jennings with her new project LUCIFER. That band's debut, 2015's "Lucifer I", was a fine piece of melodic doom metal that continued the trajectory that had been started with Sadonis's previous project.

Three years have since passed, and the time period since has seen an exodus of the entire personnel of LUCIFER's first record, save for Sadonis. Coming to the rescue to help keep LUCIFER moving forward in name was Nicke Andersson (THE HELLACOPTERS/ENTOMBED),who pinch-hits in multiple capacities on the newly released "Lucifer II". While "Lucifer I" was an impressive effort in its own right, "Lucifer II" pushes Sadonis's vocal abilities further to the forefront, while turning the overall sound of the music into an engaging sonic brew of '70s-inspired heavy music sounds.

"Lucifer II" immediately distances itself from the previous record and hits the ground running with its lead-off track, "California Son". This opening volley is a hard-driving rocker, evoking a vibe similar to GUN's classic "Race With The Devil", with catchy organ tooling and very pronounced bass guitar work from Andersson, who also fills in on drums and guitars throughout the entire record. This sets the tone for an album that pays tribute to sounds generated by many rock greats of the '70s and early '80s. While there is still an aura of occult-rock thanks to the vocal presence and Sadonis's lyrical direction, boogie-rockers such as "Phoenix" and "Reaper on Your Heels" have a DEEP PURPLE-esque air of thickly layered '70s rock.

Luckily, the faster-paced classic rock never gets an opportunity to wear out its welcome, as also layered throughout the record are some expertly composed slower-paced dark blues ballads. After "California Son" gets the record off to a ripping start, the proceedings turn towards a darker, moodier vibe, with "Dreamer" coming off as a freshly warm mimeograph of a DIO-era BLACK SABBATH track. The 1-2 punch of the first two tracks is in fact almost a carbon copy of how "Heaven and Hell" launches with the speed of "Neon Knights", and brings the speed back down with the epic "Children of the Sea". "Before The Sun" is another haunting dark ballad; here Sadonis steers the track with forlorn vocals that crack with the same emotion Stevie Nicks utilized on some of FLEETWOOD MAC's biggest hits.

Those of you that read our reviews of bands that are clearly influenced by '70s classic rock acts are probably used to seeing names like BLACK SABBATH and DEEP PURPLE pop up time and time again. But what this reviewer finds really engaging about this record is an influence that is not often found on these sorts of records. Whether intentional or accidental, there are moments that reminded me of the Southern-fried guitar work of LYNYRD SKYNYRD. Track eight, "Aton", sounds like a Satanic version of a dirty swamp rocker, while "Eyes in the Sky" is a damn near-perfect replica of the "Freebird" formula; the first half of the track being a heavy trudge followed by a blaze of guitar-based glory in the second half, with Andersson and second guitarist Robin Tidebrink each shining.

The proceedings described above would all come off as mindless pastiche if it wasn't for two saving graces. In addition to all of the musician positions filled, Andersson also was heavily involved on the production side of the record. The most pronounced difference from "Lucifer I", that stands out from the first second, is a beefier, warmer production. This is very much a record that would sound gorgeous played through an old-school '70s hi-fi speaker cabinet, with every instrument coming through loud and thick.

But what is most impressive in the evolution from "Lucifer I" to "Lucifer II" is the development of Johanna Sadonis's vocal capabilities. The German crooness sounds much more confident on every track, belting out much fuller croons than the previous record. Whether she was pushed by Andersson on the production side, or simply found her voice more this time around, Sadonis is fulfilling the promise that she has shown dating back to THE OATH's first single.

Whether the lineup for LUCIFER, which will be rounded out on upcoming live shows by bassist Alexander Mayr and guitarist Martin Nordin, stabilizes from this point forward or experiences another change over sooner than later, "Lucifer II" sets the table for the band name to be one to continue looking forward to new releases from.