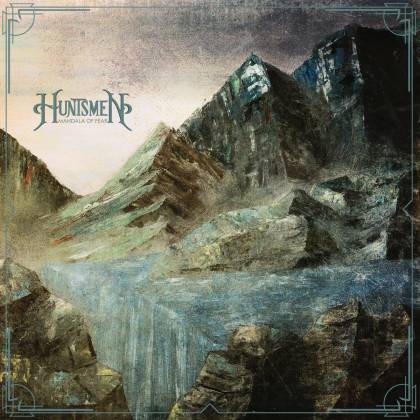 Some moments of inspiration are simply meant to be. When HUNTSMEN unveiled their cross-genre sound on 2018's "American Scrap", it was hard to believe that no one had previously blended thunderous post-metal with the windswept atmospheres and wistful harmonies of sun-scorched Americana: for those with a taste for melancholy and massive riffs, it was an album worth falling in love with. Two years on, the band have tweaked their line-up and their musical vision in one fell swoop. "Mandala of Fear" delivers everything that was present and admirable on that last record, but with a far more powerful production, a greater sense of experimental self-assurance and several songs that seem deliberately designed to make bearded men weep.

When those vocal harmonies make their first appearance not long into opener "Ride Out", sounding redolent of both YES in their early '70s pomp and FLEET FOXES from not so long ago, it's a defining and clarifying moment: your spine will either tingle or it won't. If you do embrace this wild, reckless ride into some tumbleweed-strewn nowhere, "Mandala of Fear" is precisely the kind of immersive, fluid and shrewdly structured album that people aren't supposed to have the patience for these days. As a result, it feels defiant and not a little subversive. Songs like the ominous, cudgeling "Atomic Storms" and the exuberant "Pirates of the Waste" mesmerize with riff after seismic riff, but they each boast melodies of sweetly insidious power and flurries of dynamic sleight of hand. Similarly, shorter pieces like drone reverie "Hill People Drugs" and "Loss"'s tense, acoustic shuffle reveal an endearing gift for simplicity that tallies neatly with the band's self-evident folk and country influences, while also giving this record a sense of persistent but gentle flow.

There is much gnarliness and spite simmering beneath the surface here, however: "Bone Cathedral" is a black-hearted, dissonant noise rock skitter that lurches and squalls like MY BLOODY VALENTINE gone doom; "A Nameless Dread" is sledgehammer sludge incarnate, as if UNSANE had relocated to Chicago and become obsessed with DARKTHRONE and PINK FLOYD. In fact, there is more than a little FLOYDian grandeur scattered throughout "Mandala of Fear", or at least a comparable sense of sonic space being joyously explored. Fittingly, the album's two great epics, "Awake at Time's End" and "The Swallow" are the most obvious peaks, both musical and emotional, the former is a pummeling, amorphous slug-slither, with an almost YOB-like core of dense distortion, while the latter is a master class in slow-release muscularity, as epic and unknowable as the night sky but somehow intimate and unsettling too. As rugged and brutish as it is, closer "Clearing the Sand" almost feels like an afterthought, albeit one with a giant, crestfallen chorus.

Once again, every time those vocal harmonies hit, the impact is colossal, with latest recruit Aimee Bueno deserving particular praise for her debut performances, not least on the beautiful "God Will Stop Trying". But while HUNTSMEN are plainly still evolving, "Mandala of Fear" feels complete and definitive: a singular and heartfelt statement on the current state of heaviness, both musical and metaphorical, that deserves to echo across barren plains and busy streets alike. Check your attention span first, but this is about as essential as it gets.