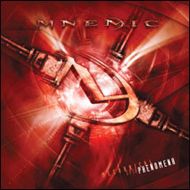 Described liberally as "hybrid metal", or a disparate meshing of styles if you will, MNEMIC's debut effort reeks of stylistic, gritty appeal. This is a record that fully embraces every angle of aggressive music and, in an overpoweringly meticulous fashion, slots them all together seamlessly. There are moments here that bring FEAR FACTORY and their "Demanfacture" period to mind, such is the industrial influence that taints the tracks. Bolstered by acerbic riffs and strong, flirtatious melodies, "Mechanical Spin Phenomena" could never quite be accused of being a one-dimensional recording, even if the general theme is one of pure, dirty, bloody extremism.

MNEMIC's sonic attack is weighty, brutal and forthright — there are no punches pulled here. The fusion of their prestigious influences has built a selection of impressive, multi-layered songs, most of which take the better part of a few listens to fully assimilate. "Liquid" is representative of the melodic appeal of this band, snapping into the chorus from an astringent verse fuelled by arduous guitars. "Db'xx'd" fires an early burst of mechanical power, "Closed Eyes" drifts on a wave of distorts and melodic flight, and "Zero Gravity" tries a shot at provoking the patience, eventually fleshing out into an eight-minute piece of negatively charged music.

There is certainly a refreshing twist to MNEMIC's corrosive musical vision, even if the songs are difficult to distinguish from each other on the initial listen. With time, "Mechanical Spin Phenomena" does fully develop within the senses and flirts with its own identity. It's doubtful that anyone will be complaining about the stark intensity of this record, given the lack of strength in the mainstream market. MNEMIC pull together enough pliable styles and, to their every credit, flourish with an immensely strong debut effort.