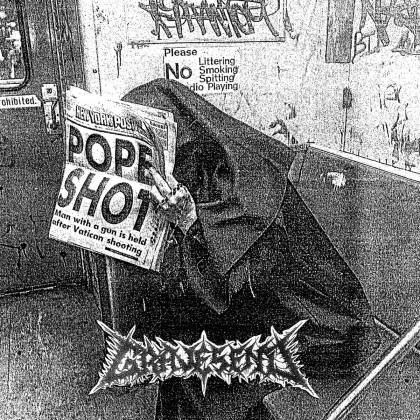 If anyone is searching for a reason to be cheerful, "Methods Of Human Disposal" is probably not the album you need to be listening to right now. For the rest of us, resigned as we are to the fucked-up nature of things, this foul and violent tailspin through the blood-spattered streets of the rotting Big Apple is exactly like the kind of reverse affirmation the doctor would have ordered, had he not already overdosed on morphine. Bless him.

GRAVESEND are a nasty bunch, and this is seething, unapologetic sonic savagery of the highest order. Thousands of bands deign to explore the darkest shadows of humanity, but very few of them sound even half as incensed and out of control as these native New Yorkers. Yes, there are strong elements of black and death metal wrestling at the core of the band's sound, but it's the fine, filthy details that make this such a purely horrible (and therefore wildly exhilarating) experience. With bursts of hissing noise, waves of suppurating synth and primitive but pugilistic sonic values, "Methods Of Human Disposal" teeters permanently on the edge of all-out war.

With an obvious debt to the grindcore classics of the late '80s, songs like "Ashen Piles Of The Incinerated" and "End Of The Line" embrace the same sense of blasting, maxed-out chaos that first made NAPALM DEATH so stupidly exciting. It's thuggish, swivel-eyed stuff for the most part, but GRAVESEND's deft weaving of primitive black metal tropes into the barrage is an intuitive masterstroke. The grinding bass tone that underpins "Subterranean Solitude" again harks back to the grind mothership, but the raging, whiteout assault that follows has more in common with REVENGE or even DARKTHRONE at their militant lo-fi best.

In fact, you could spend most of "Methods Of Human Disposal" noting the clever ways the band have smashed disparate ideas together. The reality, however, is that this is such a remorseless tornado of scabby-knuckled fury that the only sane response is to crank up the volume and be briskly pinned to the nearest wall. After all, we are, as a species, kinda fucked.