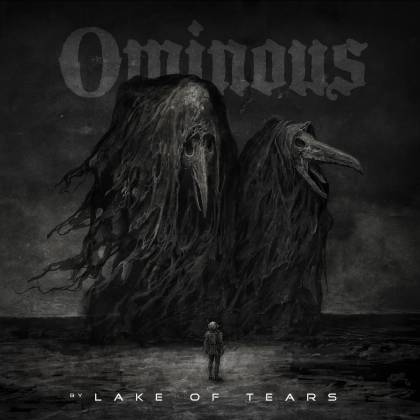 Gothic metal has the stubborn durability of a cockroach, albeit a cockroach with a taste for absinthe and cheap speed. LAKE OF TEARS have long been of the genre's most interesting and inventive bands, and recent-ish times have seen the Swedes explore a more progressive approach, with a strong whiff of both the analogue '70s and the cutting edge modern prog scene. I say recent-ish, because a decade has passed since the last LAKE OF TEARS album, and so even the most dedicated fans will have trouble guessing which path they've scuttled down this time.

Atmospherically speaking, LAKE OF TEARS haven't changed a great deal since 2011. "Ominous" belongs firmly in the same gloomy but hazily colorful world that informed the band's last few records. But this is a richer, more expansive take on their formula, and one that reveals hitherto unheard sides to their sound. After the electronic pulse and goth rock thud of "At The Destination", this subtle but unmistakable shift becomes apparent on the dust-blasted folk hymn of "In Wait And In Worries", which sounds more like something you would expect to find on a MARK LANEGAN, WOVENHAND or CRIPPLED BLACK PHOENIX album. LAKE OF TEARS have traversed such territory before, of course, but this time there is nothing tethering band or song to gothic metal tradition. As the song builds to a riveting crescendo, it makes the thought of what's coming next seem impossibly exciting. "Lost In A Moment" doesn't disappoint, either: six minutes of brooding post-punk and monolithic, doomy psych, with vocalist and creative mastermind Daniel Brennare sounding uncannily like Wino at several points, it throws up a sly David Bowie reference while morphing into a thunderous, post-industrial death march toward oblivion.

Not that LAKE OF TEARS have entirely abandoned their old trademarks. Both "Ominous One" and "The End Of This World" deliver the anticipated rush of scowling, mutant alt-metal, although the former arrives shrouded in thrillingly alien, reverberant sonic mist and the latter switches tempos to brutalizing effect. Both are stunning.

It's the melancholier moments that most noisily proclaim this band's triumphant return, however. "Ominous Too" is simply beautiful, as forlorn violin spirals around a stately, swamp-bound trudge, before taking off into some ghoulish, NEPHILIM-tinged storm of riffs. But it's the languorous sprawl of "Cosmic Sailor" that seals the deal. LAKE OF TEARS have always been a class act, but Brennare's vision can be heard blossoming anew here, via seven scintillating minutes of elegant despair, with a disquieting post-rock coda thrown in for good measure.

Closing with the stripped-down, acoustic shuffle of "In Gloom" (think Leonard Cohen on his way to hell),the ninth LAKE OF TEARS album adds great substance to an already sturdy legacy. Not just one for the goffs, it's a ferociously individual dive into the darkness within.