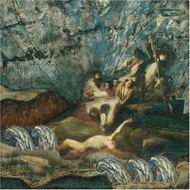 Artsy doom rock, avante-garde indie doom, experimental melancholic doom metal…you get the picture. Austin, Texas' GIANT SQUID will be an acquired taste for many, a diamond in the rough for the dedicated, and a confounding exercise in the esoteric for the traditionalists. "Metridium Fields" is another in a long-line of The End Records releases that kicks convention to the curb and over time reveals its hidden treasures to those patient enough to stick with it.

This album is a re-release of sorts. Originally produced by Billy Anderson (makes sense, doesn't it?) and released independently, the band actually returned to the studio and re-created the original effort, this time with Anderson engineering and Austin's Jason Rufuss Sewell producing. At various points, comparisons to acts like MOGWAI, ISIS, PELICAN, and NEUROSIS are sure to crop up in critical and fan reviews, if for no other reason that it's a good starting point to a album dissection. Many moments will bring terms like "drone" to mind, but not of the kind one might hear from a Southern Lord-style act. Rather, the effect of the band's crawling, yet intricate and cerebral, indie doom is often quite mesmerizing, especially when time is allowed for the musical medication to kick in. With plenty of atmospheric float and dark undertones, songs like "Versus the Siren" are rife with bleak soundscapes, driven subtly by a cold organ sound and a steady beat. It's not quite a dirge, but the feeling is there. Along with the comparatively subdued "Ampullae of Lorenzini" with its ethereal wisps and choral female vocal lines juxtaposed against the male vocals, it is one of several songs that moves between the ethereal and rock steady. And speaking of the vocals, the multi-vocalist approach gives the album an air of distinction, as the male vocals of Aaron Gregory often sound like the controlled/flowing singing of Serj Tankian (SYSTEM OF A DOWN),an excellent counterpoint to the soothing female singing of wife Aurielle Gregory. Keyboardist Andy Southard is also credited with vocals. The album's pinnacle arrives on the 21-minute album-closing title track, one that recalls the continental drift of PELICAN and ISIS to mind, albeit with GIANT SQUID's distinguishing somberness.

Look for fans of the style and a good number of critics to eat up "Metridium Fields", as it is a breath of fresh air even amongst today's decidedly more crowded eclectic doom field. I find it one that definitely requires a certain state of mind to full enjoy. Not recommended for speed freaks and meth heads.