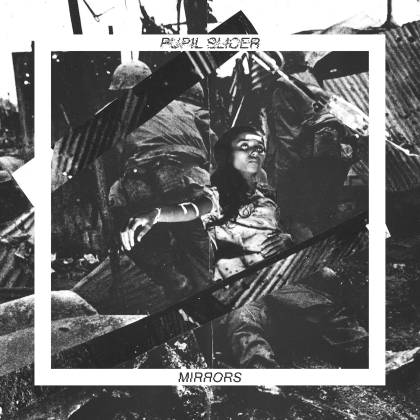 Three months into an already shitty year, what the world really needs is a debut album guaranteed to knock your teeth out through the back of your head. And here it is. PUPIL SLICER seem destined to be one of this year's success stories, if only because "Mirrors" is one of the most stupidly exciting records to be released in a long time. A sustained barrage of warped, dissonant grind, lurching, bug-eyed mathcore and muscular, death metal oomph, this trio's sound may not be unprecedented, but it's hard to recall anyone making such an instantly addictive and unerringly explosive racket out of those ingredients. Many will nod to CONVERGE and DILLINGER ESCAPE PLAN as obvious reference points, but really PUPIL SLICER are another few unsavory mutations along the path, leading a malicious, pick 'n' mix riot of violence and, significantly, utterly authentic emotional intensity. Vocalist and guitarist Kate Davies has spoken publicly about her battles with anxiety and depression: "Mirrors" resonates even more powerfully as a result, its self-evident cathartic value to its creators scrawled across every jagged riff and twisted ambient interlude.

An economical but destructive three-piece, PUPIL SLICER attack everything with absurd levels of venom. Opener "Martyrs" is jaw-dropping. From berserk, grindcore kickoff and a brief moment of horrified respite, to its final descent into polyrhythmic beatdown hell, it's a four-minute manifesto that will either have you riveted or send you screaming into the distance. "Stabbing Spiders" is even better: 48 seconds of machine-gun math metal, it arrives, smashes everything and then vanishes. Perfect. Preview single "L'Appel Du Vide" is another overwhelming assault on the senses. The song is fully syncopated and razor-sharp. Davies and her bandmates sound utterly lost in their shared reverie of noise, as a marauding, staccato battery propels everything brutally forward. Elsewhere, PUPIL SLICER veer from short, shocking freak-outs like the brilliantly snotty "Panic Defence" and the hair-raising, 76-second "Interlocutor", to more absorbing, experimental fare like the fractured and ferocious "Wounds Upon My Skin", crushing, post-metal riff spree "Mirrors Are More Fun Than Television", and the blackened, cinematic bombast of closer "Collective Unconscious". Not one second is wasted, not one idea is past its sell-by date. Davies is such a consistently commanding presence that "Mirrors" is vastly more immersive and absorbing than any record this fast, furious and fucked up has any right to be. Bravo.